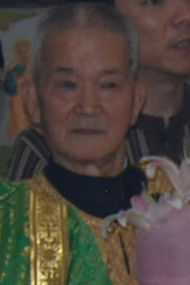 Protodeacon Evangelos (Lu) Yaofu resides in Shanghai. According to Abp. Hilarion of Sydney, until recently, he had no contact with other Orthodox. When Fr. Vladimir Boikov paid a visit to Shanghai to meet with the Orthodox, Fr. Evangelos was persuaded to come and received Holy Communion.

As he is advanced in age, he is currently not prepared to receive catechumens or unfamiliar Orthodox visitors.

In 2008 Fr. Michael Wang Quansheng and Protodeacon Evangelos Lu Yaofu, the only indigenous Orthodox clergy left in China, took part in Divine Services for the first time in 46 years, at the Russian consulate in Shanghai, and were awarded medals of the Venerable Sergius of Radonezh (I Degree) by Patr. Alexei of Moscow.