Church of the Resurrection of Christ (St. Petersburg) 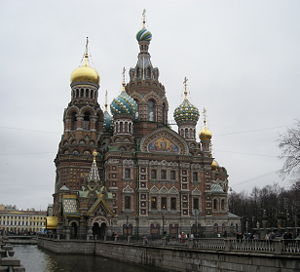 The Church of the Resurrection of Christ, also known as "The Saviour on the Spilled Blood" in St Petersburg, Russia.

The Church of the Resurrection of Christ (Russian: (Собор Воскресения Христова), also called The Saviour on the Spilled Blood and other contractions on the theme of On the Blood is a church in St. Petersburg, Russia, that was built by Emperor Alexander III as a memorial to his assassinated father, Emperor Alexander II. The church is privately owned and is part of the St. Issac’s Cathedral and Museum organization.

After the assassination of his father, Emperor Alexander II, on March 13, 1881, Emperor Alexander III, who had succeeded to the throne, ordered the construction of a church on the place his father was murdered. Having specified that the memorial church be built in the purely Russian style of the seventeenth century, the winner of the competition was architect Alfred Alexandrovich Parland whose design was based on ideas provided by Archimandrite Ignatius (Malyshev), abbot of Holy Trinity-St. Sergius Lavra outside of Moscow. and who also proposed the name for the church: the Church of the Resurrection of Christ.

The church was built at the place where Alexander II was accosted with a bomb by the Narodnaya Volya revolutionary Ignaty Grinevitsky along the Griboyedov (formerly Catherine) Canal in St. Petersburg. The emperor was mortally wounded and died later on March 13 in the Winter Palace. The Resurrection church was built over the site of the assassination at 2a Kanal Griboyedova. As the site of the assassination was near the canal, incorporation of the site into the church required an extension of the building into the canal. To assure the integrity of the church foundation, the old method of using a wooden foundation was rejected in favor of a concrete foundation, a technique new at the time. Also, a layer of clay was used to seal the foundation of the church against water penetration of the foundation.

With the initial approval by Alexander III of the basic design on July 11, 1883, a ceremonial ground breaking was held on October 18, 1883. After the final plans were approved on May 1, 1887, construction began in earnest. The church was formally consecrated on August 31, 1907, after a period of construction of twenty four years. As a memorial to Alexander II, the church did not function as a parish. Requiem services were conducted in the memory of Alexander II, but no baptisms, weddings, or funerals were conducted in the Church of the Saviour on Spilled Blood (Храм Спаса на Крови).

After the revolution of 1917 the church remained open for services for a number of years, but looting and vandalism seriously damaged the building. On October 30, 1930, the government closed the church. After it was closed, the building was used as a warehouse, but continued to deteriorate. Moves to demolish the building were brought forward a number of times. The first time was in 1931, but was not carried out. Again in 1938 demolition was planned in 1941, but the Nazi invasion canceled that plan. During the siege of Leningrad, as the city was known during its Soviet years, while it was used as a warehouse for vegetables, the church escaped serious damage other than from a shell that did not explode. After the war, the church was used to store props for the Maly Opera Theater as again, in 1956, proposals were made to demolish the fast deteriorating building. In 1961, the shell was disarmed and removed. In July 1970, the director of the St. Issac’s Cathedral and Museum, G. P. Butikov, persuaded the government officials of the historic and artistic value of the church who accepted his recommendation and, on April 12, 1971, made the church a branch of the St. Issac’s Cathedral and Museum. 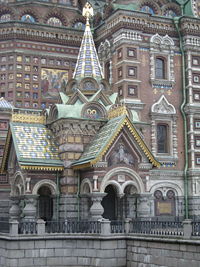 Following Alexander III’s direction for a memorial church in the Russian style of the seventeenth century, Parland’s design followed the Neo-Russian trend for church design of the late nineteenth century. The square core of the church is crowned by five cupolas, one in the center sits on the pointed roof with four larger onion-shaped cupolas at the corners. The church has three apses and one altar. A dome capped, column-like bell tower that sits over the place where Alexander II was attacked is joined at the west end of the core building. As the west end of the church juts into the canal a central entrance on the west end could not be used. Thus, entry to the church is gained through two porches on the north and south sides of the bell tower. Under the bell tower, seven steps below the level of the floor and covered by a special canopy, are the remains of the street and the canal railings with the relics of the blood stains of the assassination.

The décor of the church, both inside and outside, is a symphony of colors that delight the eye and done all in mosaics and tiles. The domes are covered in gilt and enameled sheets of brass. Gilded brass is used extensively on the exterior, with gilt on the domes and zinc and brass on the porches, cornices, and pediments. A interplay of granite and brick with mosaics are present over whole exterior. The interior is an explosion of mosaics. The media of mosaics is used in all the icons with a floor of fine marble. Today, visitors are allowed to walk only in designated aisles.

There are no paintings in the interior of the church, only mosaics. Most of the tessera work was done by the workshop of A. and V. Frolov. The mosaics were designed by a corp of Russia’s best artists of the time. Among these artists and a few of their works in the church are: 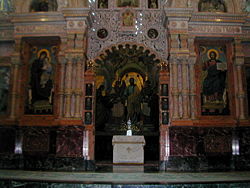 Victor Vasnetsov - “The Saviour” and “The Mother of God and the Child” on the iconostasis.
Andrei Ryabushkin - “The Healing of the Man with the Withered Hand”, “Christ Walking of the Waves”, and “The Marriage at Cana.”
Nicolai Kharlamov - “Christ the Pantocrator”, “The Eucharist”, and “Christ in Glory”.
Mikhail Nesterov - “The Ascension”, “The Descent into Limbo”, and “The Holy Trinity” on the iconostasis.
Vassily Belyaev - “The Entombment”, “The Sermon on the Mount”, and “The Blessing of the Children”.
V. Pavlov - “Christ Driving the Moneychangers from the Temple”.
Valerian Otmar - “The Raising of the Son of the Widow of Nain” and “The Angel Appearing to Joseph in a Dream”.