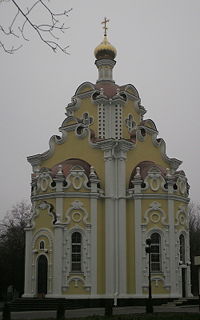 The Church of the Icon of the Mother of God «Seeking Out of the Lost» (also named Chapel of St. Yevgeny, часовня св. Евгения) is an Orthodox temple in Kharkov, located on the square near subway station "Nauchnaya" at crossing of Lenin Prospect and Kultury Street near a monument to the soldiers-internationalists who had perished in Afghanistan.

The Kharkov regional union of veterans of Afghanistan acted as the initiator of the offer to erect a chapel in memory of the soldiers-participants who had perished in local wars and in honor of Russian soldier Yevgeny Rodionov martyred in Chechnya for refusing to accept Islam. Consecration of the site of building took place on December 3, 2007[1]. During the blessing of the chapel in the Summer of 2008, Metropolitan Nikodim of Kharkov made the decision to transform the chapel into a temple with the capacity of 250 persons. The church was consecrated in honor of the Icon of Mother of God "Seeking Out of the Lost" [2]. The temple complex will also include a bell tower and a park at the church.

The church was consecrated on August 23, 2008, the Day of liberation of Kharkov from fascist aggressors.

Archpriest Alexander Zaika wasn appointed as rector of the church.

Web-site of the church