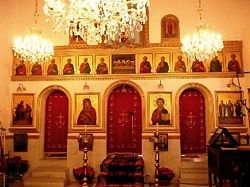 Iconostasis of the church

The church is located on the grounds of the monastery of the same name and is the worship place of both the parish and the monastery which includes also the Zahret El Ihsan school.

Since the foundation, late in the nineteenth century, of Zahret el Ihsan school and St. Catherine's Monastery, a large central hall in the monastery served as a place of worship for the nuns, the students and the orphans that the convent sheltered. The religious offices, with the exception of the Eucharist, took place in this hall. For the Sunday mass and the great feasts, the nuns and the students went on foot to the neighbouring churches: Saint Nicholas and Saint Dimitri. The Akathist of the Theotokos (called Χαιρέτισμα) that was celebrated the first five Fridays of the great Lent and the Matins of the Holy Saturday (Lamentations called Επιτάφιος Θρήνος,) celebrated on Holy Friday evening, attracted a great number of believers who came from different regions of Beirut.

In 1976 and with the beginning of the civil war in Lebanon, the St. Catherine's church became parochial when Metropolitan Elia (Saliby) of Beirut designated Father Elia (born Issa; 1916 – 2003) as pastor of the church and the new parish.

Later on in 1994, Fr. Elia was elevated by Metropolitan Elias (Audi) of Beirut to the rank of archimandrite, and served the parish until his death. Archimandrite Seraphim (born Bardawil) is the present pastor of the parish, assisted by Fr Stephanos (born Abdelnour). 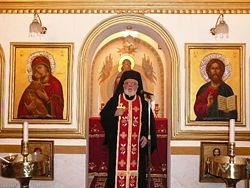 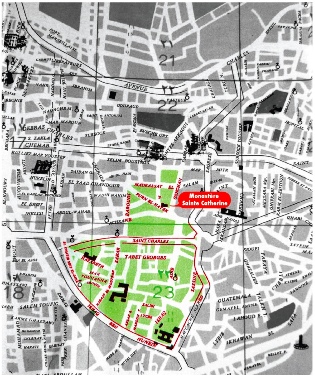