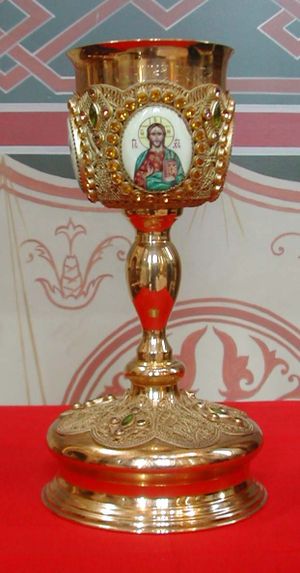 Chalice
In Orthodox Christian usage the Chalice is a form of a stemmed cup or goblet used to offer Communion during the Divine Liturgy. The chalice is usually made of a precious metal, gold or silver, and maybe plain, engraved, bejeweled, or decorated with a combination of adornment. During the entry to the eucharistic service the wine is brought in the chalice and a plate called the Paten or Diskos is used to carry the prosphora, which is a leavened bread or artos. These combined are the Holy Gifts. 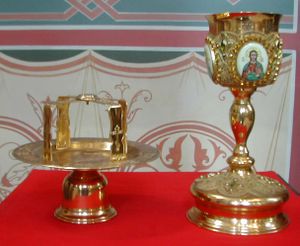 Before the Divine Liturgy begins, a service called the proskomedia is conducted at a table of preparation or prothesis at the side of the altar, during which the Holy Gifts are prepared for Communion. As prayers are recited the chalice is filled with wine and from the prosphora a Lamb is cut and placed on the paten. The prayers include commemorations from the faithful for loved ones, both living and dead. During the Great Entrance these Gifts are brought to the altar table where by joining the Lamb with the wine the celebrant calls for the bread and wine to be the Body and Blood of Christ for Communion.

Chalice of the Ipatevsky Monastery, Kostroma, 1911.