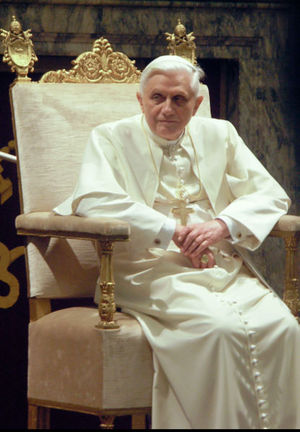 Benedict XVI (Latin: Benedictus PP. XVI), born Joseph Alois Ratzinger, is the 265th and current Pope of the Roman Catholic Church, and by virtue of that office, Sovereign of the Vatican City State. He was elected on April 19, 2005 in a papal conclave, celebrated his Papal Inauguration Mass on April 24, 2005, and took possession of his cathedral, the Basilica of St. John Lateran, on May 7, 2005. Pope Benedict has both German and Vatican citizenship. He succeeded John Paul II, who died at the beginning of April 2005.

Speaking at his weekly audience in St Peter's Square on June 7, 2006, Pope Benedict asserted that Jesus himself had entrusted the leadership of the Church to his apostle Peter. "Peter's responsibility thus consists of guaranteeing the communion with Christ," said Pope Benedict. "Let us pray so that the primacy of Peter, entrusted to poor human beings, may always be exercised in this original sense desired by the Lord, so that it will be increasingly recognised in its true meaning by brothers who are still not in communion with us." The Roman Catholic Church teaches that the Pope has a leading role among Christians because as bishop of Rome he is successor to the apostle Peter who first held the office. The role of the Roman Catholic papacy remains a source of controversy, not only for Protestant denominations but also for Eastern Orthodox churches and members of the Restorationism movement, which does not accept the dogmas of the First Vatican Council.

Patriarch of the West

The bishops of the Ecumenical Orthodox Patriarchate of Constantinople have expressed concern over Pope Benedict XVI's decision to drop "patriarch of the West" from his official titles in the Vatican yearbook. In a June 8, 2006 statement, the chief secretary of the Orthodox bishops' synod said dropping "patriarch of the West" while retaining the titles "vicar of Jesus Christ" and "supreme pontiff of the universal church" is "perceived as implying a universal jurisdiction of the bishop of Rome over the entire church, which is something the Orthodox have never accepted." The statement was issued after synod members discussed the change during their early June meeting. Cardinal Walter Kasper, president of the Pontifical Council for Promoting Christian Unity, said in a March statement that dropping the title of patriarch in reference to the pope does not minimize the importance of the patriarchal office, particularly in relation to the ancient Eastern churches. "Even less can this suppression be seen as implying new claims" of power or authority on the part of the Vatican, he said. However, members of the Orthodox synod disagreed. From their point of view, "the geographical limits of each ecclesiastical jurisdiction" have been a key part of the structure of the church from the earliest days of Christianity. The church as a whole is "a unity of full local churches" and not a monolith divided into local units simply for the sake of easier governance. The Orthodox synod's statement said that, with the international Catholic-Orthodox theological dialogue set to begin again in September with plans to deal with the "thorny problem" of papal primacy, it would have been better not to have dropped the title without consultation.

A leading Ukrainian Orthodox spokesman has said that a visit to Ukraine by Pope Benedict XVI would be "untimely," according to the country's RISU news service. "If Pope Benedict is a moral and a spiritual person and wants only good for Ukraine and its people, he will never take such an unreasonable step," said Valentyn Lukianyk, the head of the Union of Orthodox Brotherhoods of Ukraine. He was responding to the news that Ukrainian President Viktor Yushchenko has invited the Pope to visit the country. There have been numerous clashes between Orthodox and Catholic believers over the ownership of parish properties that were confiscated by the Communists and handed over to Orthodox clerics. At the same time, Orthodox leaders have complained that Catholics are engaged in "proselytism," seeking converts among Orthodox believers. In his statement opposing a papal visit, Lukianyk said that relations between Catholics and Orthodox in Ukraine are now "warming." A visit by Pope Benedict, he said, would place an undue burden on those sensitive ties.

Pope Benedict resigned the papacy on 28 February 2013 as a result of his advanced age, becoming the first pope to resign since Gregory XII in 1415.[1] His successor, Pope Francis I, was elected on 13 March 2013.

Since becoming pope in 2005, Benedict had charted a very conservative course for the church, trying to reawaken Christianity in Europe where it had fallen by the wayside and return the church to its traditional roots, which he felt had been betrayed by a botched interpretation of the modernizing reforms of the Second Vatican Council.[2]

His efforts though, were overshadowed by a worldwide clerical sex abuse scandal, communication gaffes that outraged Jews and Muslims alike and, more recently, a scandal over leaked documents by his own butler. Many of his stated priorities as pope also fell short: He failed to establish relations with China, heal the schism and reunite with the Orthodox Church, or reconcile with a group of breakaway, traditionalist Catholics.[2]

According to Metropolitan Hilarion (Alfeyev) of Volokolamsk, "Pope Benedict XVI is a person who protects the interests of his Church and who is a traditionalist in the best sense of this word, that is, who puts the preservation of church traditions much higher than, for example, popularity in the mass media...Benedict XVI was very positively perceived both in the Catholic Church and in the Orthodox Church. We value this traditionalism in him and we are hoping that his successor will continue the policy of protecting the traditional Christian theological and moral doctrines," he said.[3]

(Don Nicola Bux, one of Benedict’s close collaborators, on the deeper meaning of the papal resignation.)