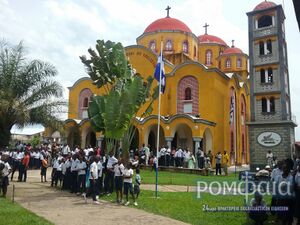 The Holy Archdiocese of Kananga and Equatorial Africa is a diocese under the jurisdiction of the Patriarchate of Alexandria. Its territory includes the parishes and missions located in the Greater Kasai region of Congo.

The first Eastern Orthodox structure to reach Equatorial Africa was the Archdiocese of Central Africa, comprising the territories of modern-day Gabon and the two Congolese nations. Its seat was the southern capital Elisabethville (modern Lubumbashi) in Katanga, near the border with Northern Rhodesia (modern Zambia).

Eastern Orthodoxy first reached the city of Kananga in the Congo in 1970, when the blessed Archmandrite Chrysostomos Papasarantopoulos started the Congolese Mission with the help of the archdiocese, where he would spend the last two years of his earthly life. There he spread the Holy Orthodoxy between the native population Kananga, who showed a great response to that new Faith. One month before his death, he wrote a letter saying:

“I love the Africans and am fully convinced that the Lord has brought me here. I hope to use the few remaining days of my old age preaching and teaching here. The place I am now located in is a large city (Kananga) of 50,000 people near the central part of the Congo. The people are eager to learn about Orthodox Christianity. But I am old and alone and my capacities are now limited. I don't know how I'll manage, but the Lord Jesus will show me, as He always has in the past. Remember me in your prayers.”

On December 13, 1972 while traveling from Kananga to Katanga he was overcome by profuse nose-bleeding. He returned to Kananga, celebrated the Divine Liturgy on Christmas Day, and died on December 29, 1972. The Congolese Mission was continued by Archmandrite Chariton Pneumatikakis until his repose in 1998. Archmandrite Chariton met with Hieromonk Kosmas of Gregoriou, an Athonite monk who studied by himself to become a missionary in Africa. He reached Katanga as a layman in 1975, and was responsible for building nine churches in less than two years. This overwork brought him headache for the years to come, but he persisted and was finally counseled by Saint Paisios to become a monk in Athos. Monk Kosmas traveled to Kananga in the end of the decade as an hieromonk to serve Archmandrite Chariton before departing to Katanga. He later wrote:

“Our African brethren are people with inwardness. Europeans usually underestimate them, but they are wrong to do so. The soul of Africans is inclined towards mysticism and this is why Orthodoxy has something to say to them, of a monastic and Athonite type. Because among our African brethren magic has great power, it is a true demonocracy. Their magicians are very powerful and have great influence, but ultimately Satan exterminates even these. This is why they often resort to Christ, the victor over all magic, demonic bonds and spells. In Africa I saw how true the gospel of Christ is.”

In 1997, Fr. Chariton's work was carried on by Archmandrite Ignatios Madenlides. On March 23, 2003 he was ordained Archbishop of Central Africa and kept his missionary efforts until his resignation for health reasons in 2010. In 2004, His Eminence started the construction of the Church of Saint Andrew in Kananga, which was completed in 2010 as the largest Eastern Orthodox church in Africa. Its consecration was performed on October 21, 2012 by Patriarch Theodoros II. During his homily, His Beatitude spoke about the vision of the late missionary Fr. Chariton and about the efforts for the construction of that church by Abp. Ignatios, then Archbishop of Pentapolis (2010–2017) until his repose.

In 2006, Archbishop Ignatios established two dioceses within his archbishopric: the Diocese of Kolwezi to serve the missionary activities in Katanga, Mainland Africa, and the Diocese of Brazzaville and Gabon in Atlantic Africa. Kananga was still not ready to become an diocese, so it remained under Central Africa's omophorion. On March 29, 2018, the documentary “Kananga” was released about the everyday life of the Orthodox Christian community of Kananga.

In 2010, the Athonite hieromonk and professor Nikiforos Mikragiannanitis, who was in Congo since 2006, succeeded as Archbishop of Central Africa. In 2016, Archmandrite Theodosios Tsitsivos from Patras landed in Congo, where he was made the protosyngellos of the archdiocese, and, in 2017, he became the Patriarchal Comissioner to Central Africa. On November 26, 2018, the Patriarchate of Alexandria established the Archdiocese of Kananga and Equatorial Africa to serve the city of Kananga and the region of the Greater Kasai in Congo. Father Theodosios was elected on December 6 and enthroned on February 24 of the following year by Patriarch Theodoros at the Cathedral of Saint Andrew. The Governor of Kananga, the Consul of Greece in Congo and Archbishop Nikiforos were present. In one of his visits to Lukalaba in mid-2019, he said:

“While we were on our way to the village, I noticed that there were some people near the river searching for something in the mud [to give me]. I asked what they did there and told me they were looking for diamonds. I do not need such diamonds. My diamonds are you. You who shine like diamonds thanks to your faith and holiness.”

During Archbishop Theodosios' era, missions and churches have been constructed in the Greater Kasai, including in the villages of Bilomba, Sankuru and Bala (some of which are made of traditional materials and grass roof. At one occasion, there were over forty students from Kananga in the Theological School of Kinshasa. In the war-ridden country with thousands of victims and one of the most dangerous places in the world, the Patriarchate of Alexandria is a manger of hope for the weak and impaired.