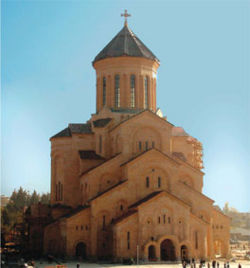 Holy Trinity Cathedral was built to commemorate the 1,500th anniversary of the autocephaly of the Church in Georgia and the 2,000th anniversary of the birth of Jesus Christ. The idea for a new commemorative cathedral first appeared in 1989 and was developed through a multi stage competition for the design that became the "Holy Trinity Cathedral". The winning architect was Archil Mindiashvili.

The cathedral was consecrated on November 23, 2004, St. George's Day, by Catholicos-Patriarch Ilia II of Georgia.

Sameba Cathedral is located on Elia Hill, on the left bank of the Mtkvari (Kura) River in the area of Old Tbilisi called Aviabari. It is within the Diocese of Mtskheta and Tbilisi. The church is built in the form of a cross with the dome over the crossing. There are nine chapels within the cathedral, dedicated to the Archangels and to St. John the Baptist, St. Nino, St. George, St. Nicholas, the Twelve Apostles, and to All the Saints. Five of the chapels are located below the main floor.

A free-standing bell tower is adjacent to the cathedral.

The grounds upon which the cathedral has been built are also the sites of buildings associated with the Church of Georgia. These include the residence for the ruling Catholicos-Patriarch, a monastery, and the Tbilisi Theological Seminary and Academy.