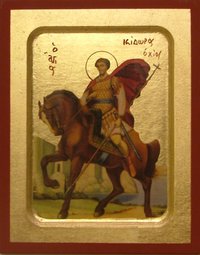 The holy, glorious and right-victorious Martyr Isidore of Chios brought Christianity to the Greek island of Chios. He was born in Alexandria, Egypt and was martyred in the persecutions of Decius, c. 251 AD; his body was taken to Venice in 1125 and hidden in the palace of the Doge; it was re-discovered in the early 14th century. His skull was discovered in Chios, encased in a silver and jeweled reliquary, and translated to Venice in 1627. The Orthodox Church celebrates his feast day on May 14.

A Roman officer in the navy, Isidore confessed himself as a Christian to the commander of the fleet, Numerian, while they were on the Aegean island of Chios. Because he was unwilling to repent and worship the gods of the state, he was tormented and beheaded.

His body was cast into a cistern. A young Christian woman, Myrope (see December 2), with the help of a friend, retrieved the body although it was guarded by soldiers. On learning that the soldiers would be put to death if they failed to find the body, Myrope went to Numerius and confessed that she had taken Isidore's body, but refused to say where it was then interred. Numerius had her publicly flogged, then thrown into prison.

Before she died, she had a vision of Holy Isidore, who "encouraged her with the news that although she was about to die for what she had done it would not have been in vain because she would be giving her life for Jesus Christ and not for Isidore or their Christian friends."[1]

Her body was interred beside Isidore's, and a chapel erected over the graves. Saint Marcian built another in the fifth century. In 1525, the relics of Isidore and Myrope were moved by the Latins to the Church of Saint Mark in Venice.

Your Martyr, O Lord, in his courageous contest for You received the prize of the crowns of incorruption and life from You, our immortal God. For since he possessed Your strength, he cast down the tyrants and wholly destroyed the demons' powerless presumption. O Christ God, by his prayers, save our souls, since You are merciful.

In your holy prayers to God, you have shone brightly, a great guide for all the world. Therefore, we praise you on this day, O Saint, you Martyr of godly mind and boast of Chios, O glorious Isidore.