From OrthodoxWiki
(Redirected from Iakinf (Bichurin) of Beijing)
Jump to: navigation, search 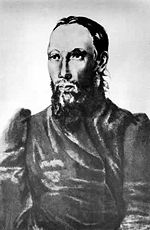 Upon his arrival at the mission, Arch. Iakinf, engaged in the normal routine of the mission of divine services, upkeep of the facilities, conducting the religious education of the Albazins, and studying the members of the mission. The Albazins were descendants of the original inhabitants of the mission who were cossacks who had settled there in the late seventeenth century on what became the mission property. Having a knowledge of the Chinese language, he prepared a brief catechism in Chinese of Orthodox Christianity.

His studies reached such an intensity that after his return to Russia, his religious motivations were brought into question: were his social science interests in sinology greater than interest in the religious affairs of the mission? As a result of the criticisms, Arch. Iakinf was deposed and exiled to Valaam Monastery for four years. After his release from the monastery, in 1826, Iakinf became a translator for the Asian department of the Russian Foreign Affairs Ministry. Iakinf continued his studies of China, making two trips to Siberia in 1830 to 1831 and 1835 to 1837. He was instrumental in the establishment of a Chinese language school in Kyakhta for which he prepared the text books.

His work as a sinologist gained him membership in the Academies of Science of Russia, Germany, and France. After his release from Valaam in 1826, Arch. Iakinf lived in the Alexander Nevsky Lavra where he reposed on May 11, 1853.