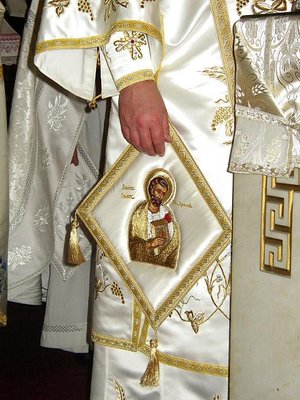 The epigonation (Greek: ἐπιγονάτιον, literally meaning "over the knee"), or palitza (Russian: палица, "club"), is a diamond-shaped vestment worn on the right side by priests and bishops.

In the Byzantine tradition, the epigonation is awarded to a priest upon his elevation to exomologos (confessor) or the rank of οικονόμος. In the Russian tradition, it is an award given after many years of service. Though a Russian Palitza is identical in shape, and is obviously related to the Greek epigonation, the most literal Slavonic translation for epigonation is actually "Nabedrennik", which is another vestment, rectangular in shape, which no longer exists in non-Slavic usage.

It represents a shield, originating from the thigh shield worn by soldiers during the days of the early church. The epigonation holds a dual meaning. First, it denotes the celebrant as a "soldier" of Christ. Second, it symbolizes the Word of God, fighting the wiles of the enemy.

The epigonation is worn by all bishops, and as an ecclesiastical award for some priests.[1] Its origin is traced to the practice of Byzantine Emperors awarding ceremonial swords to their military commanders in recognition of their valour in defending the empire. Such swords were often accompanied by elaborate thigh-shields which were suspended from the belt and protected the leg from bruising caused by the constant bumping of the sword against the thigh. When the emperors began to give awards to the clergy, the thigh-shield alone was awarded.[2]

The vestment is a stiff, lozenge shaped cloth that hangs on the right side of the body below the waist, suspended by one corner from a strap drawn over the left shoulder. In the Russian tradition it is an award for service; in the Greek tradition it is usually a sign that the priest has an advanced academic degree and a blessing to hear confessions. If a Russian priest has been awarded both the nabedrennik and the palitza, he shifts the former to the left side. It is considered to symbolise the "sword of the Spirit, which is the Word of God" (Ephesians 6:17); that is to say, the wearer's defending of the faith by smiting all that is impure and vicious.[3]

Upon donning his epigonation, the cleric prays: "Gird Thy sword upon Thy thigh, O Mighty One, in Thy comeliness and Thy beauty, and bend Thy bow, and proceed prosperously, and be king, because of truth and meekness and righteousness, and Thy right hand shall guide Thee wondrously, always now and ever, and unto the ages of ages. Amen.".

The epigonation's origin is uncertain. According to some authorities it was a decorated tablion or thigh-shield awarded to officials in the Byzantine Empire, originally military and later civilian. According to others it was originally an ornamental handkerchief, called at that date encheirion, "hand cloth", which received its present form and name in the twelfth century. In the former case it has no Western counterpart; in the latter it would correspond to the Western maniple.

It is also said that it was used to carry documents relating to one's position in the Church. Papers such as those certifying one's ordination and rank would be most relevant when travelling. Carrying them in the Liturgy would be symbolic of bearing one's authority to conduct the Holy things of the Liturgy.

During an ordination, a priest or deacon is taken in procession three times around the Holy Table (altar), after each circuit he bows down before the bishop and kisses his epigonation and his right hand.[4] Also, in some liturgical traditions, when a bishop performs a lesser ordination, such as the setting-apart of a subdeacon, he lays his epigonation over the candidate's head as he says the prayer.