The Diocese of Bodbe is an ecclesiastical jurisdiction in the nation of Georgia. St. Nino, Enlightener of Georgia, Equal-to-the-Apostles (remembered on January 14), is buried here. 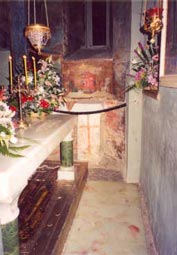 The diocese's territory historically was called Kambechovani and its people those "with bad character," according to Vakhushti Batonishvili, an eighteenth-century historian. In the fifth and sixth centuries, there were two dioceses in the region: Khornabuji and Bodbe. Khrnabuji was administrative centre of Kambechovani. This area had great importance, politically and otherwise, because both dioceses were located near the border of the state; the Western side of Kambechovani was the Diocese of Bodbe, while the other side was the Diocese of Khornabuji.

Beginning in the middle of the seventh century and for a hundred years afterwards, Arabs had invaded the region. After they formed the Principality of Hereti, the two dioceses of Kambechovani were included in its territory.

The hierarchs of Bodbe were the main defenders of the Faith in the region, not only by their words, but by the sword. They participated in several wars against the Muslims. In 1792 Kirile, Metropolitan of Bodbe, was killed by the Muslim Lezgins (a North Caucasian tribe).

The diocese was severely damaged by the Persians. In the years 1614-1617 the Persian Shah Abbas I relocated more than a hundred thousand Georgians into the Fereydan region of Iran. He then decided to replace them with immigrant Turkman and North Caucasian Muslim tribes. This period was a very difficult one in the history of Georgia. 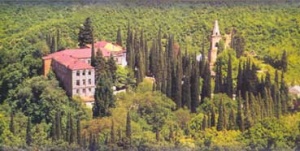 After its autocephaly was abolished in 1811, the diocese was united within the Diocese of Alaverdi and Kakheti.

In 1925, after the restoration of its autocephaly, the Diocese of Bodbe was restored.

The Diocese of Bodbe includes the districts of Sighnaghi and Dedoplistsqaro. There is one stavropigial women's monastery in the diocese.

The current primate of the diocese is His Grace David, Bishop of Bodbe.