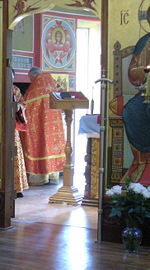 The crosier of the ruling bishop of the Orthodox Church in America, Metropolitan Jonah, before the Royal Doors of his Cathedral, St Nicholas Cathedral, Washington, D.C.

The crosier, also crozier, (Greek: paterissa; Slavonic: zhezl) is carried by Orthodox bishops and senior monastics as a stylized staff of office and a symbol of authority and jurisdiction. The crosiers are staffs that generally come with one of two different tops: on one form the top of the crosier is usually in the shape of the Greek letter Tau, with the arms curving downward, and the other is surmounted by a small cross. Crosiers are usually made of fine metal often gilded or silver plated. Some may be made of fine wood.

When the prelate is not vested for services in the church, he uses a different, smaller staff that is in the form of a walking stick topped with a silver pommel.

The Archbishop of Cyprus is uniquely privileged among the bishops in carrying a crosier that is shaped like scepter used by the Eastern Roman emperors. This privilege is one of the ‘’Three Privileges’’ granted to the Church of Cyprus by Emperor Zeno.