Vyacheslav (Slava) Sergeyevich Krasheninnikov (Russian: Вячеслав Сергеевич Крашенинников, Vyacheslav of Chebarkul; March 22, 1982, Yurga, Kemerovo Region - March 17, 1993, Chebarkul, Russia) was a Russian boy who died from Leukemia at the age of 10, who is regarded by some people as a Wonderworker, having had a gift of prophecy during his life, and who has continued to work miracles after his death, according to local and popular accounts.

The Russian Orthodox Church after careful study of his life and his statements rejected the possibility of his canonization.

Vyacheslav was born March 22, 1982 in Yurga and was baptized in the town of Tayga in the Kemerovo Region. His father Sergey V. Krasheninnikov was a soldier, and his mother Valentina Afanasyevna Krasheninnikov was a housewife, and was born in Bogotol. He had an elder brother, Constantine, who was the first child in the family, and a sister Valentina, also called Slaviana, the second child, who died in hospital.

Since his father was an army officer, the family moved several times to new places of residence. Vyacheslav was almost one year old when his family moved to East Germany, due to his father's military service duty there. In Germany, Vyacheslav had a small accident and fell from a tree, hitting his head, but without any serious consequences.

He was over five years old when his family moved to a new location in the Ural Mountains. The last few years of his life were spent in Chebarkul in the Chelyabinsk Region. Although Vyacheslav did not attend Kindergarten, he went to the local elementary school № 4. During this period Vyacheslav lived with his mother in an apartment in Chebarkul, while his father worked for a time in Shadrinsk, and his older brother Constantine joined the army.

According to his late mother's published memoirs, Vyacheslav was in many respects an unusual child. A statement by the Missionary Eparchy of Chelyabinsk characterized him as:

coming from a pious Orthodox family, having an angelic appearance, being remarkably kind, obedient, intelligent, pious, devout, and besides this, possessing exceptional abilities from early childhood: he prophesied and was able to diagnose and treat various diseases. These abilities were noticed by the local inhabitants in Chebarkul and in Miass, as well by other visitors. His family stated that he was taken twice to the Holy Trinity-St. Sergius Lavra, where he had lengthy conversations with Elder Nahum and where the gift of Healing was certified as being a gift of "God."[1]

On the other hand, according to Luba Menschikovoy, the director of the elementary school № 4, "Vyacheslav Krasheninnikov was an ordinary boy and an ordinary student. Then suddenly after his death there arose so much noise, hype and rumors about him."[2]

His first teacher Irina Abramovna Ignatieff, said: "I ​​remember Vyacheslav. He was an average student, but was a very good and kind child. Indeed he was surrounded by some kind of aura, and people were saying that he helped others, and was able to recognize people's ailments."

When he was ill with Leukemia he refused to receive blood transfusions, saying that receiving the blood of another person brings the sins of that person as well, and that the transfused blood does not merge with the blood of the patient because it is dead blood. 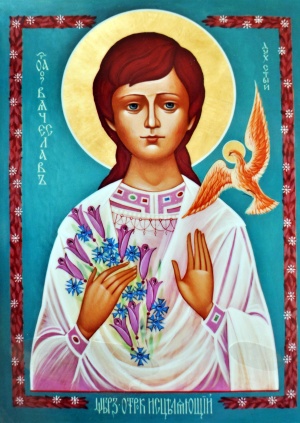 An false-icon of Vyacheslav Krasheninnikov with the Holy Spirit.

A small chapel was built over his grave covered with icons, even including an icon of Vyacheslav as a saint. Pilgrims from all over Russia visit the country, as well as monks from Mount Athos. They pray at his chapel, and an akathist was composed in his honor.

Visitors believe that miraculous healings have occured at his grave site. In addition, the rocks, earth and snow from around his grave site are believed to possess miraculous healing properties. His father brings pieces of marble from a quarry near the village of Koelga, and he places them on the gravesite. Vyacheslav had said that marble is a living stone, which drives away unclean spirits. Pilgrims collect pieces of this marble, sometimes pouring water over the marble, and then drinking the water.

Several books were written about this boy, starting with the book "Oh, mama, mama ...", written by Gennady Pavlovich Bystrov (released in 2001-2002), based on his ​​mother's account. Valentina herself wrote "Miracles and the predictions of the boy Slava" and "Sent by God." Lydia Emelyanov wrote two others - "The boy Slava"and "God speaks through His elected representatives". These books relate the unusual qualities and abilities of the boy, his posthumous appearances, and associated miracles.

In 2009 Archpriest Peter Borodulina recorded on video the program "Blessed are you when you are insulted ...", in which he expressed his firm conviction that Vyacheslav Krasheninnikov was a Saint.

In 2010 a four-part documentary series was released on DVD called "The Russian Angel directed by Sergei Bogdanov.

In 2011 the second 4-part film was released dealing with the prophecies of Vyacheslav.

In 2007 Metropolitan Job (Tyvonyuk) of Chelyabinsk and Zlatoust set up a commission of inquiry into the emergence of this cult.

After the completion of the commission's work, he appealed in a letter to the bishops of the ROC not to admit the veneration of Vyacheslav, referring to him as the fake-saint of Chebarkul. The letter says (translation):

Due to the increasing incidence of pilgrimages of clergy and laity of many dioceses of our Church to the city of Chebarkul to venerate the so-called "youngster Vyacheslav of Chebarkul", by this report we remind everyone that the person is neither canonized by the Russian Orthodox Church, nor locally recognized. The cult of "the young man, Vyacheslav" is self-invented, contains elements of ordinary superstition, blasphemous attacks on the Church's teaching and is permeated by a group of anti-Church-minded individuals.[4][note 1]

The Commission rejected the possibility of formal canonization for Vyacheslav, mainly due to the fact that many of his statements do not correspond to the orthodox faith. In addition, according to the commission, part of the "prophecies" of Slava is only a free paraphrase of Hollywood fantastical movie[1]. The Missionary Diocese of Chelyabinsk also issued a special brochure called "Refuse wives' fables" («Бабьих басен отвращайся»), devoted to criticism of the cult of Vyacheslav.

The attitude of the Patriarch of Moscow and All Russia Alexy II in regard was to the veneration of Vyacheslav was also negative (translation):

We do understand the grief of the mother who has lost quite a young son. However, we note with bitterness that her next steps were intended to arouse public interest in the deceased child, and the creation of the cult of veneration as a saint, does not correspond to church doctrine and church practice of canonization, and veneration of the saints. The young man is not in need of religious veneration, and they had no grounds for declaring him a saint, but above all he needs the fervent prayers of his mother.[5][note 2]

In 2010, the Publications Board of the Russian Orthodox Church forbade the distribution through the church network of the books "Ah, mama, mummy..." («Ах, мама, маменька…») and "God speaks to His elected representatives..." («Бог говорит избранникам своим…»).[6]