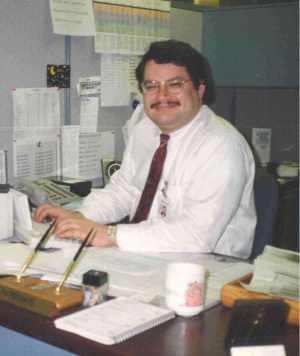 Me at my office at JPMorgan Chase.

Hi. I'm John Paterakis. I grew up in Garden City, New York, and now live in New York City. I've spent most of my life here, except for four years in Philadelphia, where I completed my undergraduate studies.

For most of my working life, I've been in the banking business. Most recently, I was a Vice President at JPMorgan Chase Bank, running a client service group in their Global Custody unit. However, I've recently decided to leave that field to pursue my long-standing interest in global issues and humanitarian work. I've just started a Masters degree program at New York University's Center for Global Affairs. I received my Bachelors of Business Administration in Management and Finance from Temple Univeristy in 1984.

I worship at the Greek Orthodox Archdiocesan Cathedral of the Holy Trinity in New York City. I've been the second chanter of the Cathedral since about 1995. If you subscribe to the Antenna Satellite network (or Time Warner Cable in New York City,) you may have seen me; our liturgy is televised on Sundays from 10:00 a.m. to noon Eastern Standard Time. It's also available as streaming video on the Web at our parish website from 9:00 a.m. to noon EST. For the past several years, I've also sung for select services during Lent at St. Nicholas' Cathedral in Brooklyn, the mother church of the Antiochian Orthodox Christian Archdiocese of North America.

I've been active in the field of Missions for a number of years. I was Treasurer of the Orthodox Christian Mission Center from 1996 to 1999, and a board member of the OCMC for twelve years, from 1987 to 1999. I'm currently the Treasurer of Church World Service, the relief and development agency of the National Council of Churches of Christ in the USA. In that capacity, I represent the Greek Orthodox Archdiocese of America on the CWS Board of Directors. I'm a member of the NCCCUSA Governing Board since 2004. One of the many blessings of this work has been the opportunity to travel: my CWS and OCMC work has brought me to Russia, Ukraine, Georgia, Thailand, Vietnam, Haiti, the Dominican Republic, and Venezuela, among other places.