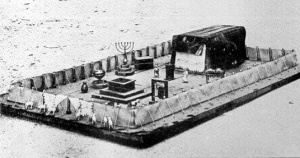 A reconstruction of the tabernacle
The Tabernacle is known in Hebrew as the Mishkan ( משכן "Place of Divine dwelling"). It was to be a portable central place of worship for the Hebrews from the time they left ancient Egypt following the Exodus, through the time of the Book of Judges when they were engaged in conquering the land of Canaan, until the time its elements were made part of the final Temple in Jerusalem about the 10th century BC.

The English word "tabernacle" is derived from the Latin word tabernaculum meaning "tent, hut, booth." Tabernaculum itself is a diminutive form of the word taberna, meaning "tavern". The word Sanctuary is also used as its name.

The detailed outlines for the Tabernacle and its leaders are enumerated in the Book of Exodus:

Also, in a later tradition, from Hebrews: 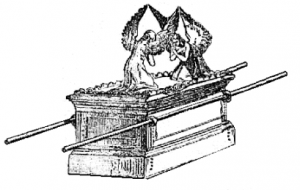 A 19th century illustration of the Ark of the Covenant
The tabernacle of the Israelites during the Exodus was a tent draped with colorful curtains. The outside was draped with rams'-hair curtains, and the roof was made from rams' skins. It was divided into two areas, separated by a curtain: the outer room, containing the seven-branched candelabrum, and the inner room, also known as the "Holy of Holies" (kodesh hakodashim), and containing the Ark of the Covenant (aron habrit). More detail on the description can be found in Exodus, chapters 36, 37, and 38.

Transplantation into the Temple at Jerusalem and utilization

When King David conquered Jerusalem and his son King Solomon built the first temple, known as Solomon's Temple, all the elements of the tabernacle were incorporated into the newly built permanent temple.

The Levitical Priests would use the tabernacle to speak to God. Twice a day a priest would stand in front of the golden prayer altar and burn fragrant incense. Other procedures were also carried out in the Tabernacle.