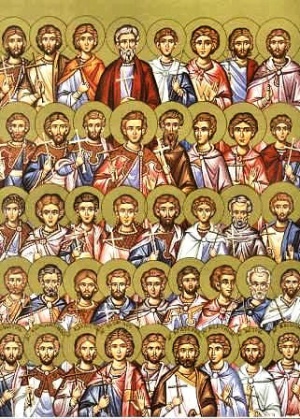 The Holy 42 Martyrs of Amorium[note 1] (†845) — Passion-bearers Constantine, Aetius, Theophilus, Theodore, Melissenus, Callistus, Basoes and 35 others with them — were prominent officers and notables of the Byzantine city of Amorium, one of Byzantium's largest and most important cities at the time, who were seized following the capture and systematic destruction of the city in 838 AD by the Abbasid caliph Al-Mu'tasim, then taken as hostages to Samarra (today in Iraq) and executed there seven years later for refusing to convert to Islam.

Their feast day is celebrated by the Orthodox Church on March 6.

Amorium was an episcopal see (bishopric) as early as 431, and was fortified by the Emperor Zeno, but did not rise to prominence until the 7th century. Its strategic location in central Asia Minor made the city a vital stronghold against the armies of the Arab Caliphate following their conquest of the Levant.

The city was first attacked by the Arabs in 644, and taken in 646. Over the next two centuries, it remained a frequent target of Muslim raids (razzias) into Asia Minor, especially during the great sieges of 716 and 796. It became the capital of the theme of Anatolikon soon after.

In 742-743, it was the main base of iconoclast Emperor Constantine V against the usurper Artabasdos. In 820, an Amorian, Michael II, ascended the Byzantine throne, establishing the Amorian dynasty. This began the period of the city's greatest prosperity, when it became the largest city in Asia Minor.

However due to its' status as the native city of the reigning dynasty, in 838 AD the Caliph Al-Mu'tasim launched a campaign specifically against the city, which was captured and razed.

During the war between the Byzantine Emperor Theophilus the Iconoclast (829-842) and the Saracens, the Saracens managed to besiege the city of Ammoria. As a result of treason on the part of the military commander Baditses, Ammoria fell, and forty-two of its generals were taken captive and sent off to Syria.

During the seven years of their imprisonment they tried in vain to persuade the captives to renounce Christianity and accept Islam. The captives stubbornly resisted all their seductive offers and bravely held out against terrible threats. After many torments that failed to break the spirit of the Christian soldiers, they condemned them to death, hoping to shake the determination of the saints before executing them. The martyrs remained steadfast, saying that the Old Testament Prophets bore witness to Christ, while Mohammed called himself a prophet without any other witnesses to support his claim.

They said to the soldier Theodore:

"We know that you forsook the priestly office, became a soldier and shed blood in battle. You can have no hope in Christ, Whom you abandoned voluntarily, so accept Mohammed."

But the martyr replied:

"You do not speak truthfully when you say that I abandoned Christ. Moreover, I left the priesthood because of my own unworthiness. Therefore, I must shed my blood for the sake of Christ, so that He might forgive the sins that I have committed against Him."

The executioners took each one separately and led him off to be beheaded, then threw the bodies into the River Euphrates. In the service to them, these holy passion-bearers are glorified as:

The most long-term result of the fall of Amorium, was in the religious rather than in the military sphere. Iconoclasm was supposed to bring divine favour and assure military victory, but neither the army's weaknesses nor the reported treachery of Baditses could detract from the fact that this was "a humiliating disaster to match the worst defeats of any iconophile emperor" (Whittow), comparable in recent memory only to the crushing defeat suffered by Emperor Nikephoros I (r. 802–811) at Pliska. As Warren Treadgold writes, "the outcome did not exactly prove that Iconoclasm was wrong ... but it did rob the iconoclasts for all time of their most persuasive argument to the undecided, that Iconoclasm won battles". Iconoclasm was thoroughly discredited, and a little over a year after Theophilos' death, on 11 March 843, a synod restored the veneration of icons, and iconoclasm was declared heretical.[1]

The city itself never recovered from the sack, but retained an active bishopric until definitively conquered by the Seljuks following the Battle of Manzikert in 1071. Emperor Alexios I Komnenos defeated the Seljuks at Amorium in 1116, but the area was never recovered.

Troparion - Tone 4
Your forty-two holy martyrs, O Lord,
through their sufferings have received incorruptible crowns from You, our God.
For having Your strength, they laid low their adversaries,
and shattered the powerless boldness of demons.
Through their intercessions, save our souls!

Kontakion - Tone 4
Forty-two holy martyrs of Ammoria,
you contended for the sake of Christ on earth;
you were revealed as crown-bearing martyrs,
and have been received into the life of the joy of heaven.
Since you overthrew all the wiles of the enemy
by your sufferings and the blood of your wounds,
you continually send down from on high remission of sins to those who praise you.