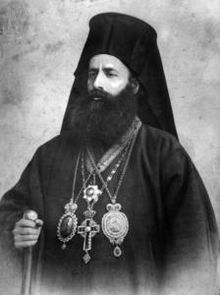 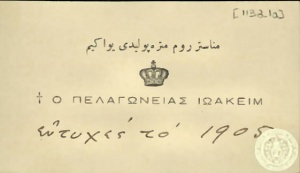 Following graduation from the Patriarchal Theological School of Halki, he was sent for advanced studies to Europe, studying for two years at Oxford and four years in Germany, where he received his doctorate in theology and philosophy. That Phoropoulos went to Oxford was unusual for his time. Most clergymen of the Ecumenical Patriarchate did their advanced studies then in Russian Theological Academies or German Universities. He was one of the few members of the hierarchy who had a knowledge of the English language.

In 1907 Patriarch Joachim III referred the matter of the Baptism and Ordination of Robert Josias Morgan (Fr. Raphael Morgan) to Metropolitan Joachim for his report. Robert Morgan had been sent from America with two documents of support from the Greek Orthodox Community of Philadelphia, recommending that he be baptized and ordained into the priesthood. Metropolitan Joachim examined Robert, noting that he had a "deep knowledge of the teachings of the Orthodox Church", and that he also had a certificate from the President of the Methodist Community, duly notarized, stating that he was a man "of high calling and of a religious life". Metropolitan Joachim recommended that, according to the Biblical exhortation "...the one who comes to Me I will certainly not cast out" (John 6:37), that Robert be received. In early August 1907 before some 3000 people, Metropolitan Joachim officiated at Robert's baptism, who received the name "Raphael". Subsequently on August 12 he ordained Fr. Raphael to the diaconate, and on August 15, 1907, the feast of the Dormition of the Theotokos, to the priesthood.