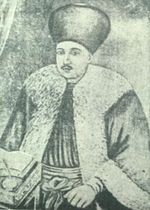 Gregory's date of birth is uncertain, but tradition sets his birth in Constantinople, as either in 1777 or 1778, to a priest named George and a mother Helen, on the same day that the renowned Peter Lambadarios the Peloponnesian died. During his youth he learned the Armenian language and music. Then, his father sent him to the Sinai, at Valata where under the abbot archimandrite Jeremias he learned the Greek language and, with his fine voice, became a reader and cantor.

During the time between 1800 and 1810, Gregory married and began raising a family with a number of children.

During his life time Gregory participated in a historic reform of byzantine music notation. Gregory, along with the archimandrite Chrysanthos and Chourmouzios Chartophylax, often referred to as the Three Teachers, systematized into a single method the theory of Byzantine Music. In 1814, they developed an explanation of the old notation and transcribed the melodies as used from before 1814 into the new notation that they had developed.

To dispel suspicion that the Teachers were inventing new Psalmody, the Three Teachers presented their new method of teaching and learning Byzantine music to the Holy Synod of the Church of Constantinople. After thorough discussions, the Synod, under the chair of Patriarch Cyril VI, approved their work.

To facilitate the use of the new method, a school was founded at the Sinai Metochion to teach the new method of music, its rules, and grammar. The teachers at the school were the monk Chrysanthos and Gregory, the Lambadarios of the Great Church, who presented the new method to over 200 students each day in classes that included hierarchs, protosyggeloi, and deacons, as well as many laymen.