From OrthodoxWiki
Jump to: navigation, search
This article or section needs a cleanup to bring it to a higher standard of quality. Recommendation:
Source statements to reputable authorities and bring formatting inline with Style Manual.
More detailed comments may be noted on the talk page. You can help OrthodoxWiki by editing it, especially to conform to the Style Manual and the suggestions in How to write a great article.

The Coptic Orthodox Church in Wales was established in 1992, with the consecration of the first parish in the town of Risca, South Wales

It is known in the ecclesiastical history of the Church of Alexandria that the Church had sent missionaries in the third or fourth century to the Celtic lands, especially monastics.citation needed

It is also know within the Celtic tradition, especially in Ireland that the foundation of the monastic system among the Celts was either based in portion or inspired by the Egyptians monastic system and there are many traces of Alexandrine Theology imbedded in the Celtic Theology. So the return of the Church of Alexandria to these lands is of certain importance.citation needed

Although the Coptic Orthodox congregation has been present is Wales since the 1960s , The first Coptic Orthodox Church in Wales was consecrated in 1992 by HH Pope Shenouda III of Alexandria in the town of Risca, South Wales.

Currently there are two Coptic Orthodox Churches in Wales. 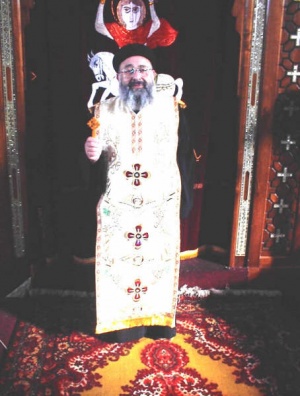