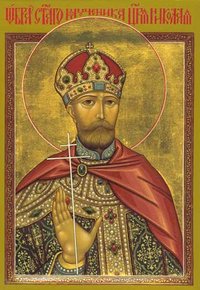 The right-believing Emperor Saint Nicholas Alexandrovich Romanov was the last reigning emperor (tsar, цар) of Russia at the time of the Bolshevik Revolution. Together with his wife, Alexandra Fyodoronova, formerly Alexandra of Hesse-Darmstad, and their children Olga, Tatiana, Maria, Anastasia and Alexey, and their servants Doctor Evgeni Botkin, cook Ivan Kharitonov, attendant Aleksey Trupp and attendant Anna Demidova, they are recognized as Passion-bearers by the Russian Orthodox Church. Their feast day is on July 17. ROCOR officially recognizes them as Martyrs.

In February 1917, during the February Revolution, Nicholas reluctantly abdicated the throne, hoping that doing so might save the nation some violence. After the Bolshevik (October) revolution, he and his family were exiled to Siberia, where they were detained under house-arrest. On July 16, 1918, the family was lined up in the basement and shot. The bodies were buried in an unmarked grave.

The remains of Emperor Nicholas II and his family in the Catherine Side Chapel of the Ss Peter and Paul Cathedral in St. Petersburg, Russia.

Most noble and sublime was your life and death, O Sovereigns;

Wise Nicholas and blest Alexandra, we praise you,
Acclaiming your piety, meekness, faith, and humility,
Whereby ye attained to crowns of glory in Christ our God,

With your five renowned and godly children of blessed fame.
O passion–bearers decked in purple, intercede for us.

Royalty and martyrdom were joined together, O blessed ones,
In your death for righteousness and right belief, O wise Sovereigns,
Nicholas and Alexandra, with your five children.
Hence, Christ our God counted you worthy of thrones in Heaven;
And with twofold crowns of glory,
You reign forever, adorned with grace divine.

Help with box
Retrieved from "https://en.orthodoxwiki.org/index.php?title=Nicholas_II_of_Russia&oldid=122664"