The icon of Panagia Galaktotrofoussa (Gr., "she who feeds milk", also "the Virgin Lactans") is the name of one of the many names given to the Virgin Mother and is the name of an icon and a monastery.

The original is on the Holy Mountain in Karyes in the Typikaria on the right side of the iconostas; usually reserved for icons of Christ. It is also one of the most venerated in Serbia and there are many wonderworking copies in Russia .

The Galaktotrophoussa is one of rare icons. This icon originally stayed in the monastery of St. Sabbas the Sanctified consecrated in Jerusalem. Together with his staff it was bequeathed to the future Sava of Serbia, the royal son who would come to the monastery as a simple pilgrim. It was expected that at the moment of his paying respect to the tomb of Sabbas of Jerusalem the tied up Episcopal staff would fall down. The prophecy came true when the Serbian monk arrived to the monastery in the 13th century. Sava was presented with the Episcopal staff of Sabbas of Jerusalem, the icon of the Virgin Tricherousa (formerly belonging to John Damascene), and the icon of the Galaktotrophousa. Upon his return to Mount Athos, Sava displayed the icon of the Galaktotrophousa in the kellion in Karyes. On that occasion, a precedent in Orthodoxy occurred; the icon was placed to the right of the Royal Doors, in the place reserved for the icon of Christ. 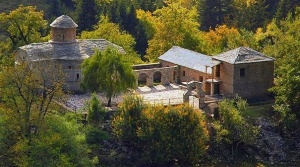 The monastery of Panagia Galaktotrofoussa is located at the confluence of the Chalikiotikos and Lepenetsiotikos Rivers, tributaries of the Acheloos River, on the road that leads to Kalarites (Thessalia, Greece). This monastery was founded in 1799 and is less known than the surrounding monasteries of the Meteora region.

Situated on the southern coast of Cyprus, in the Limassol district, Apsiou village stands at the foothill of Limassol forest, 17 Km north of Limassol and 600 metres above sea level. Apsiou is a very attractive place and is divided into two parts. As you enter the village from the main road (limassol Kalo Chorio) you will find the recently built houses of Kato Apsiou (Lower Apsiou) and Ayios Epiphanios church. Following your way to Pano Apsiou (Upper Apsiou), you will find the more traditional, mstone-built houses of the old village, at the end of the road a very old church "Panagia Galaktotrofousa" (dating back to 1740) is found hidden in the cypress trees. --->