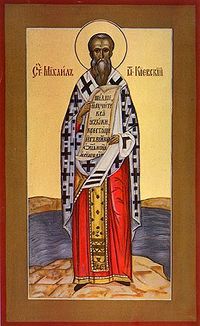 Our father among the saints Michael of Kiev (Mikhail I) was the first Metropolitan of Kiev, from the year 988 to 991. He is commemorated by the Church on September 30, and on June 15 the day of his repose.

Saint Michael arrived at Korsun in the year 989 with other clergy, not long after Prince Vladimir's baptism. Not much is known of his early life, but it is likely that he may have been Bulgarian, Serbian, or Syrian by birth.

Being the first metropolitan of the Russian Church, he traveled the newly-enlightened Russian lands, preaching the Holy Gospel, baptizing and teaching the newly-illumined people. He credited with establishing the first churches and religious schools.

St Michael died in the year 992 and was buried in Kiev. In about the year 1103, his relics were transferred to the Antoniev Cave, and on October 1, 1730 into the Great Church of the Caves.

The prophecy of the first-called apostle has been fulfilled today:
Grace has illumined the hills of Kiev and the faith is increased.
Those who were not a people
Are now the people of God, a holy nation,
A flock of Christ of which you, O Michael, are first shepherd,
And you serve it by bringing baptism.
O Hierarch, standing before God pray that all may be saved!

You appeared as a second Moses,
Bringing the vine from Egyptian idolatry into the land of promise.
You said of it: Faith shall be established in this land,
And fruit to nourish the world shall flourish on the summits of Kiev,
More than on the heights of Lebanon.
Having this harvest we bless you, O Hierarch Michael!