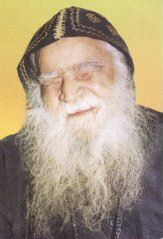 The name of St. Andrews was "Youssef Khaleel Ibrahim", and he related, according to what his parents told him, that he lost sight when he was three years old.

When he was thirteen years old, he headed to the village "El Zawarah" where the residence of the monastery of St. Samuel is located.

There he was well received by the church instructor, and he acquired and learned church rituals, chants and hymns at the hands one of the monks named "Ibrahim El Fayoumy". He completed his learning in less than ten years!

He was in charge of the hardest tasks to be done at the monastery, he had to raise water from the monastery well to fill a very large basin everyday manually.

Some people saw scorpions beside him but causing no harm, they discovered a serpent sleeping on his shoulder as if they were friends.

He stayed alone in the monastery for four months living on dry bread, and salty water. He used to bless people saying: "May God be with you, not against you".

St. Andrews died on 7 February 1988, he lived about 75 years as a monk, but is still performing miracles even after his departure.