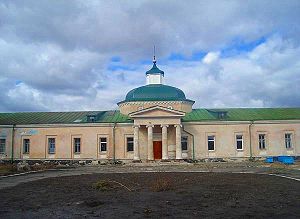 Samara Desert-Nicholas Monastery (Russian: Самарский Пустынно-Николаевский монастырь) is a monastery of the autonomous Church of Ukraine, also known as the Ukrainian Orthodox Church (Moscow Patriarchate). It is located in a deciduous forest on an island at the confluence of the Old and New Samara Rivers in Novomoskovsk, Ukraine.

The monastery was founded in 1602 as Kievo-Mezhgorskogo Monastery by Cossack Hieromonk Paisiem, destroyed in 1654, and rebuilt from 1672-1688. However, the Polish-Lithuanian King Stephen Batoriya referred to the “relocation of the monastery in Samara” in 1576 suggesting the monastery existed before.

The monastery was the most important shrine in the Zaparozhian Sich, and was a fortified outpost during the Russian-Turkish wars of 1734-1739 and 1768-1774. During the latter the monastery housed many prisoners both Tartars and Turks. The prisoners were treated so well that many of them were baptized, and some, following the war, became monastics.

During the Soviet period the monastery was a nursing home, followed by a home for the mentally retarded. In 1993 the parish buildings were renovated, and two years later the monastery was reopened as a convent.

On March 12, 1998 the Holy Synod of the Ukrainian Orthodox Church (MP) transformed the convent into a men’s monastery.

Like most architectural monuments of Ukraine, the monastery is in a lamentable state of emergency.

The main shrines of the monastery are the Ahtyrskaya Icon of the Mother of God, called “Samara,” and an icon of St. Nicholas.