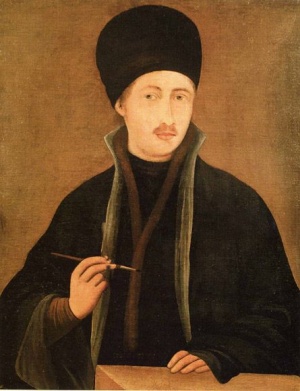 Zahari Zograf, also known as Zahari Hristovich Dimitrov, was a nineteenth century Bulgarian iconographer who is considered among the greatest painters of the Bulgarian National Revival of the nineteenth century. Zahari is noted for his icon painting as well as his murals in churches. He has often been regarded as the founder of secular art in Bulgaria for his introduction of everyday life elements in his work.

Zahari was born in 1810 in the town of Samokov in southwest Bulgaria, into the family of Hristo Dimitrov, who had founded the Samokov iconographic school. As his father died in 1819, Zahari was taught by his brother Dimitar Zograf with whom he later worked as an equal. In 1827, he became a spiritual student of the monk Neophyte of Rila. In 1831 at the age of 21, Zahari was proclaimed a master and became an equal partner of his brother.

With his older brother Dimitar, Zahari painted the frescoes of the main church of the Rila Monastery, the largest and most famous monastery in Bulgaria. He is most known for his icons in the Church of Ss. Constantine and Helen of Plovdiv, the Church of the Theotokos in Koprivshtitsa, as well as in many monasteries. Among Zahari's best known frescoes are those in the main church of the Rila Monastery, in the chapel and the St. Nicholas Church at the Bachkovo Monastery, the Troyan Monastery, and the Transfiguration Monastery. In the latter three monasteries, Zahari also painted three mural portraits of himself, an action that was regarded as controversial at the time.

Zahari lived and worked on Mount Athos between 1851 and 1852. During that time he decorated the outer narthex of the Katholikon of the Great Lavra Monastery. He also did several donor portraits in various churches in his later years.