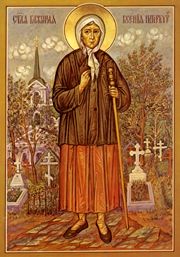 Our venerable Mother, the Blessed Xenia of St. Petersburg, (Russian: Святая блаженная Ксения Петербургская [Xenia Grigoryevna Petrova]) is an 18th century Russian fool-for-Christ. In grief over the death of her husband, she distributed all her possessions and took up a life as a holy fool. Her life was centered on God, and she sought protection and comfort only in Him while wandering among the poor of St. Petersburg. She is commemorated on September 11.

Having been as a wandering stranger on earth,
sighing for the heavenly homeland,
thou wast known as a fool by the senseless and unbelieving,
but as most wise and holy by the faithful,
and wast crowned by God with glory and honor,
O Xenia, courageous and divinely wise.
Therefore, we cry to thee:
Rejoice, for after earthly wandering thou hast come to dwell in the Father’s house.