Difference between revisions of "Wilfrid" 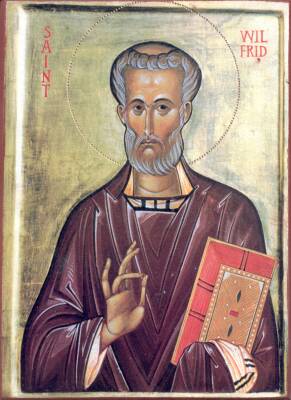 Wilfrid, also called Wilfrith and Wilfred, was a Saxon bishop who lived in England during the seventh century. He was a strong supporter of Roman rules and practices over those of the Celts and Saxons. In the dispute over the method for calculating the date of Easter, Bishop Wilfrid supported the Roman method at the Council of Whitby in 664. His feast day is October 12.

Wilfrid was born about the year 633 to a Northumbrian noble family. Unhappy with his life at home under his stepmother Wilfrid, at age fourteen, was sent to the court of King Oswiu and, then, at his request to the Monastery of Lindisfarne. After three years at Lindisfarne, Wilfrid accompanied St. Benedict Biscop to Rome where Wilfrid became the pupil of the pope's archdeacon, Boniface. After returning to England, Wilfrid was given, in 658, the Monastery at Ripon by Alchfrid, the son of Oswiu. There, he established the Benedictine Rule and put forward Roman practices and rules. It wasn't until after five years as abbot of Ripon that Wilfrid was ordained a priest. To settle the dispute over Roman rules, the Synod of Whitby was convened in 664 at which Wilfrid's position was upheld. As a result Bishop Colman and his monks withdrew to the North, leaving Northumbria.

With the departure of Bp. Colman, Wilfrid was elected his replacement, but chose to be consecrated in Gaul because of the lack of what he considered to be validly consecrated bishops in England at that time. Wilfrid delayed his return to England which resulted in his see being filled by Chad of Mercia. Thus, upon his return to Northumbria in 666, Wilfrid retired to his monastery at Ripon confining his activities to Lichfield and Kent in Mercia.

In 669, after Archbishop Theodore of Canterbury, found Chad's consecration defective, Chad withdrew and Wilfrid became the Bishop of York. For the next nine years Wilfrid discharged his episcopal duties, founded monasteries, built churches, and improved the liturgy. After Ecgfrid succeeded his father as king of Northumbria, Wilfrid's relations with the king deteriorated. Under these conditions Abp. Theodore implemented his plan to divide the very large diocese of Northumbria, an action that Wilfrid opposed. This led to the deposition of Wilfrid by king Ecgfrid and Wilfrid's journey to Rome and an appeal to Pope Agatho. While Pope Agatho ruled in Wilfrid's favour, Ecgfrid refused to honor the papal decree and imprisoned Wilfrid on his return to Northumbria before he was exiled to Selsey in Sussex.

In Selsey, Wilfrid established an episcopal see and converted the pagan inhabitants of the Kingdom of Sussex to Christianity. Although Wilfrid and Abp. Theodore reconciled in 686, recurring disputes with the king, now Aldfrid, continued. Wilfrid was expelled again in 691. He went to Mercia, where he helped missionaries and acted as bishop for the Mercian king. His expulsion was appealed to Rome, which ordered a local council which was held at Austerfield in 702. The council, led by Archbishop of Canterbury Berhtwald, went against Wilfrid, and he again journeyed to Rome in 704 where he was again upheld. While he considered the re-organization of the dioceses in England unsatisfactory, Wilfrid regained possession of his Northumbrian monasteries of Ripon and Hexham.