The year 1867 saw Overbeck, with 122 signatures from the Oxford Movement, petition the Church of Russia for the establishment of a Western Rite church in full communion with the Eastern Rite. A seven-member synodal commission was then formed, and invited Overbeck to attend. The idea was approved, and Overbeck set about submitting a draft of the proposed Western liturgy, which added an epiclesis and the Trisagion hymn to the so-called "Tridentine" Mass. This rite was submitted in 1871, and was examined and approved by the commission. Overbeck focused his efforts on the Old Catholic movement, who had rejected Papal Infallibility. He continued to engage in polemics with Catholics, Anglicans, and Orthodox converts using the Byzantine Rite.

The Oriental Orthodox churches also have some Western Rite parishes. The Syrian patriarchate of Antioch consecrated Antonio Francisco Xavier Alvarez as Archbishop of Ceylon, Goa, and India in 1889, authorizing a Roman rite diocese under him; in 1891, the Syrians consecrated the aforementioned Joseph René Vilatte as archbishop for the American Old Catholics. 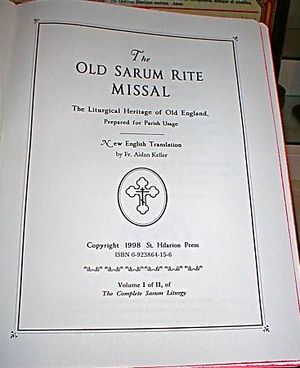 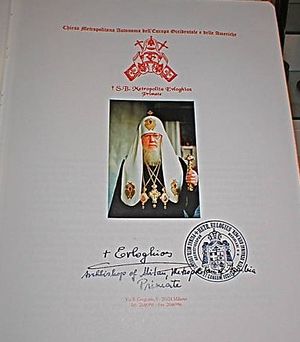 The Russian Orthodox Church Outside Russia (ROCOR) also has a small number of Western Rite parishes in addition to three monasteries, one located in Canada, on in Tasmania, and one in Florida. Missions and parishes of the ROCOR Western Rite use either the Rite of St. Gregory in one of varying uses (Sarum, Christminster, Mount Royal, or Overbeck), the Gallican Rite, or "The English Liturgy," an English Use service based upon the Sarum Use but which adapts a few elements of the 1549 Book of Common Prayer. Christminster Monastery in Hamilton, Ontario, Canada, is a Western Orthodox Benedictine monastery, which celebrates the Liturgy of St. Gregory. St. Petroc Monastery in Hobart, Tasmania, Australia, celebrates the Sarum Rite. St. Petroc has a number of dependencies that follow its liturgical usage, as found in the Saint Colman Prayer Book.

In 2008, Metropolitan Hilarion of ROCOR blessed Hieromonk David (Pierce) to assist Dom Augustine Whitfield "in the continuation of the work of Mt. Royal" at Hieromonk David's monastery, Holyrood, in Florida. This blessing includes the celebration of the Mt. Royal recension of liturgy, the "Holyrood/St. Petroc' Sarum on High Feasts," and occasional celebration of the Byzantine Rite. Some have stated on rare occasions he uses propers once used in the Eastern Archdiocese of the Holy Synod of Milan, although no quotation of his to this effect has been produced.

In late 2008, Metropolitan Hilarion also gave a former hieromonk of the Milan Synod, Father Aidan (Keller), a blessing to use his own translation of the Old Sarum Rite Missal for his personal prayers (see image) , while he serves a Byzantine parish in ROCOR. His liturgy had previously been blessed by the Western Archdiocese of the Milan Synod (see image).

It should also be noted that there are a number of churches that use various Western rites but who are not in communion with the mainstream Orthodox Church.

In addition, the Holy Synod of Milan, an Old Calendarist group not in communion with the mainstream Orthodox Church, has a number of communities (under the central direction of the monastery and Archdiocesan center, the Abbey of the Holy Name) which worship according to Western rites, including its own version of the Sarum Use (different from the version of the Sarum Rite used within ROCOR before 2008.)