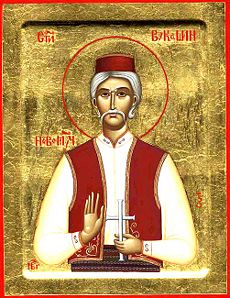 Our father among the saints, Vukašin of Klepci (in Serbian: Свети Вукашин из Клепаца), was a Serbian Orthodox Christian from Herzegovina who was martyred by fascists during World War II for refusing to acknowledge the Ustashi leader. He is remembered on May 16 under the new calendar.

Little is known about the life of Saint Vukašin. He was born in the village of Klepci, in Herzegovina, at the turn of the nineteenth/twentieth century. He was from a well known family of Mandrapa and moved from Klepci to Sarajevo. His family was known as benefactors of the church of Archangels Michael and Gabriel in Sarajevo. He and his nephews Chedo and Dobro were serving as readers at this church. At the beginning of World War II, he fled from Sarajevo back to Klepci and was hiding from fascists until the members of the Croatian fascist Ustašas arrested him and transported him, together with other Serbs of that region, into the notorious concentration camp of Jasenovac (the number of victims at this camp have been estimated to be at least 700,000). His martyrdom was revealed by doctor Nedelko Nedo Zets in 1946. Many relatives of Vukašin were also killed, including his nephews who died in Jasenovac.

One night in January of 1943, 3000 people were sent to death. Four Ustashe`s soldiers (their names were Petro Brzitza, Zrinushich, Shipka and Zhila) decided to kill people on a bet and compete who will kill most. During the night, one of the killers, lieutenant Josep Friganovich with nickname Zhila, signifincantly surpassed the others killing 1100 people in several hours while others killed 300-400. He felt an ecstasy, a special enthusiasm from the killing. When Zhila saw Vukašin, he was stroke by his calmness, the ecstasy disappeared and for several seconds he could not even move.

Zhila approached Vukašin and asked about his life, his family and felt an irresistible desire to destroy the calmness of Vukašin. The killer said that he would spare his (Vukašin's) life if Vukašin cried loudly: "Long live Pavelic!". Ante Pavelic was the leader of Ustashe movement and Independent State of Croatia - a Nazi puppet state. Vukašin, who saw a knife in the hands of the soldier, replied calmly: "My child, you do what you must", and refused to obey the soldier`s request. The Ustashe soldier brandished his knife and cut off Vukašin`s ear. The soldier then repeated his request. Vukašin repeated his answer. The soldier then cut off Vukašin's other ear, followed by his nose, and then scarred Vukašin`s face. Next his tongue was cut. After repeating the request to Vukašin to utter the vicious words and hail the Head of Ustaše (Ante Pavelic), Vukašin once again calmly replied: "My child, you do what you must". In the end, Vukašin made the sign of the Cross with his hand. Distracted, the soldier cut his hand and eventually killed him and afterwards went mad.

Right after the death of Vukašin, Zhila could not kill any more and lost the bet to another killer, Petro Brzitza, who executed 1350 people. Zhila often started to see a vision of Vukašin saying "My child, you do what you must". And this phrase in the head became so unbearable that Zhila started to drink a lot of alcohol, but this did not stop the voice. And then he began running around and attacking random people trying to stop this nightmare and suppress this memory. The story of martyrdom of Vukašin was written by doctor Nedo Zets in the hospital from the words of the killer.