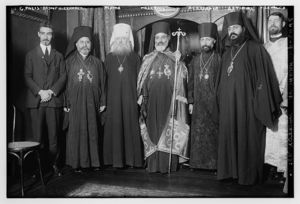 Father Vsevolod was born on July 13, 1877, into a religious and churchly family in town of Zhizdra in the Province of Kaluga in Russia. He was given the name Vladimir. Showing a preference for a life of service to Christ and His Church, young Vladimir entered the community of St Nicholas Monastery in Orlovsk Province, near the town of Karachev in 1893. Noticing Vladimir's talent for music, the igumen assigned him to sing in the monastery choir. While at the monastery, he also was trained in bell ringing which at Russian monasteries was a specific art.