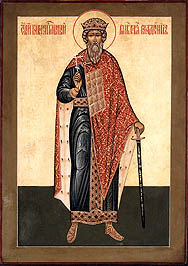 Saint Vladimir (Svyatoslavich), Baptizer of Russia (958-1015) was the Grand Prince of Kiev.

St. Vladimir was a devout pagan in his early life. He was a great conqueror, who had many wives, and erected many pagan statues in the lands that he ruled over.

Everything, however, changed when St. Vladimir’s envoys arrived in Constantinople. Upon attendingDivine Liturgy in the Hagia Sophia, the envoys said “We no longer knew whether we were in heaven or on earth"

Taking the word of his envoys, St. Vladimir had himself and his nation baptized Orthodox.

St. Vladimir changed completely after his baptism. He destroyed all the pagan statues that stood in Russia, and replaced them with Churches. He also attempted to live in peace as much as possible with his neighbors, and had only one wife.

St. Vladimir is also the grandson of St. Olga, and the father of St. Boris and St. Gleb the Passion-Bearers.