Victor studied for four years at the Kazan Ecclesiastical Seminary before entering Kazan University in 1914. As a university student he sang with the Morreff Choir, which Mr. Koltchin (later choir director of Holy Trinity Cathedral in San Francisco) also joined, and attended the conductor class at Kazan Hummert Music School. After three years of student life, he was called into the Army as an officer, but was released after the February Revolution. He then returned to the Kazan University for his fourth year.

After the Great Kanto Earthquake of September 1, 1923, severely damaged the Holy Resurrection Cathedral in Tokyo, the then Archbishop Sergius often visited Harbin to obtain support for restoring the Cathedral. Amongst his activities, Sergius was looking for a capable leader for the choir at the cathedral. Among the candidates that the archbishop interviewed he liked the music of Victor Pokrovsky who was directing the choir at the Holy Theotokos Church in Harbin. Invited by the archbishop, Victor moved to Japan in 1924 to form a full-scale choir at the Holy Resurrection Cathedral and to introduce the new Russian masterpieces, such as those by Arkhangelsky and Kastasky.

The choir's repertory expanded quickly. They sang the music of Tchaikovsky, Smolensky, Strokin, Chesnokov, Arkhangelsky, and Kastolsky. Some years later, thanks to his pupil Tito Kato, Victor's music was published in Osaka. There were some 75 titles, and many of them, for example, Smolensky�?'s Paschal Stichera, and Makarov�?'s The Angel Cried, are still sung in many churches in Japan. 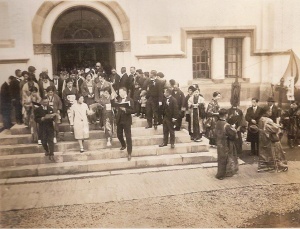