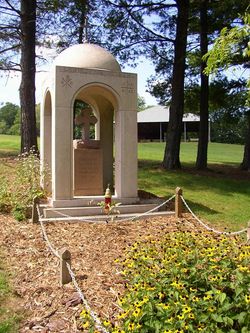 The grave of Metr. Victor at the Antiochian Village

His Eminence the Most Reverend Metropolitan Victor (Abo-Assaley) of New York was the first primate of the Antiochian Orthodox Christian Archdiocese of New York.

He was consecrated by the Patriarch of Antioch and assigned to organize the Syrian parishes in North America into a common diocese following the disorder created by the breakdown of the Russian North American diocese.

Victor was consecrated on September 11, 1924, and began his efforts in the United States shortly thereafter. Metr. Victor's efforts were met with limited success among the Syrian parishes led by Bp. Aftimios Ofiesh within the Russian North American diocese. The majority of parishes remained loyal to Bp. Afitmios.

Bp. Victor died on April 19, 1934. After his death the parishes loyal to him were administered by Archimandrite Anthony Bashir who had come to the United States independently in 1922 as "a missionary to the unchurched Syrians of America."