Difference between revisions of "User:Fedya911" 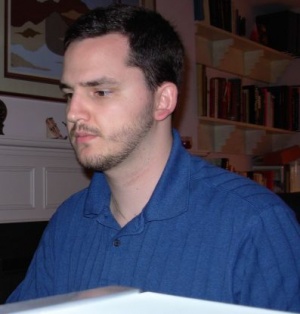 I am Derek John Power, recently conferred a Bachelor of Arts (with Honors in Music) from the College of William and Mary in Virginia. The main project that I have recently completed is a thesis analyzing Arvo Pärt's rendition of the "Canon of Repentance to our Lord Jesus Christ" entitled Kanon Pokajanen. In addition to using music analysis, I also use Orthodox spirituality and theology to conclude that the music that Pärt composed does reflect repentance as the Orthodox Church understands it. It was awared High Honors.

I was born on September 6 1982 in Great Falls, MT, USA and was raised in the United Methodist Church. Right before attending William and Mary, I had an interest in learning more about the Orthodox Church. On November 9 2002, I was received into the Orthodox Church - specifically at Ss. Constantine and Helen Greek Orthodox Church in Newport News, VA (hence the numbers in my username). My chrism name is Theodoros after St. Theodore the Studite and within the Church, I much prefer to be called Fedya (the Russian diminutive). I attend services primarily Protection of the Holy Mother of God Orthodox Church in Falls Church, VA where I serve as the Choir Director and one of the high school teachers.

Currently I'm working on an exciting new project. The larger scheme is that I want to make "cinematic ikons" or films serve very similar functions and purposes as traditional ikons. I have several ideas of what to either make for myself or what I would like to help make. This includes three possible films about repentance. The first one - and this is the one I'm immediately working on - is entitled Omnvendelsen [Danish: repentance]. This film will be shot not only as a cinematic ikon (the story and the characters will be focused on repentance) but also as a Dogme95 film (technical minimalism: no additional lighting, handheld camera, only diagetic sound, etc.). The screenplay has already begun and should be completed some time in early 2006. Production is projected to start mid-2006.

My other favorite interests (other than theology, music and film) also include history and philosophy and I have also shown interest in art, economics, government, international affairs, literature, neurology, physics, poetry, politics and psychology.