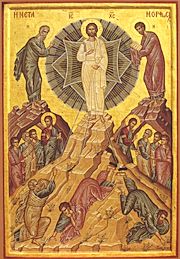 In Greece the harvest season traditionally began on the Transfiguration. Grapes, in particular, were not eaten before August 6. In some parishes, the first grapes would be brought to church for a blessing and distributed to parishioners.

You were Transfigured on the Mount, O Christ God, Revealing Your glory to Your disciples as far as they could bear it. Let Your everlasting Light shine upon us sinners! Through the prayers of the Theotokos, O Giver of Light, glory to You!

On the Mountain You were Transfigured, O Christ God, And Your disciples beheld Your glory as far as they could see it; So that when they would behold You crucified, They would understand that Your suffering was voluntary, And would proclaim to the world, That You are truly the Radiance of the Father!