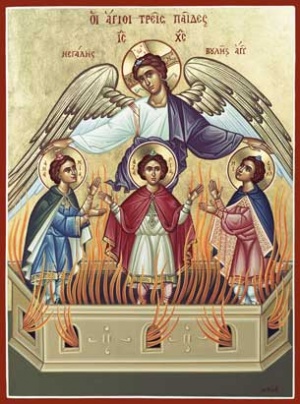 The Three Holy Children in the Fiery Furnace
In the Book of Daniel, The Three Holy Children, Hananiah (Shadrach), Mishael (Meshach), and Azariah (Abednego) were all companions of the Prophet Daniel and fellow kinsmen in the tribe of Judah. During the reign of King Jechonias they were taken prisoner and led away as captives with other Jews during the Babylonian Captivity. Eventually they were taken into the court of King Nebuchadnezzar as servants, stripped of their Hebrew names, and given Babylonian names which honored pagan deities. They later would be delivered by God from death after being placed in furnace by Nebuchadnezzar. They are commemorated December 17.

As told in Chapter Three in the Book of Daniel, King Nebuchadnezzar constructs a golden cult image of himself which he orders the populace to worship. Hananiah, Mishael, and Azariah defy the king's order, refusing to worship anyone but God alone. Nebuchadnezzar, in a fit of rage, orders that the three children be thrown in a furnace. Inside the furnace, Azariah prays for the forgiveness of his sins and those of his people, asking God to demonstrate his power to the Babylonians. They are delivered from the fire by an angel who makes the flames feel like a cool breeze over dew. Seen in the furnace walking with a fourth individual unscathed and praising God, the three children emerge. Nebuchadnezzar then orders the people to worship their God instead of the idol.

Before this event, Daniel interpreted a mysterious dream Nebuchadnezzar had of a statue composed of precious metals which was ground to dust by a rock hewn from a mountain without human craftsmanship. This vision is said to prefigure of Christ's incarnation, the Son of God who is begotten and not made, destroying death through His Resurrection.

The Church also teaches that it was Christ taking the form of an angel who saved the youths from their torment. In icons of this miracle, the angel sports a halo bearing a cross, indicating that He is Christ. The song of the three children is alluded to in odes seven and eight of the canon in matins and on other occasions in liturgical season. The reading of the story of the furnace, including the song Prayer of the Three Holy Children, is prescribed for the vesperal Divine Liturgy celebated by the Church on Holy Saturday.

Great are the accomplishments of faith,
for the Three Holy Youths rejoiced in the fountain of flames as though in the waters of rest;
and the prophet Daniel appeared,
a shepherd to the lions as though they were sheep.
So by their prayers, O Christ God, save our souls!

You did not worship the graven image,
O thrice-blessed ones,
but armed with the immaterial Essence of God, you were glorified in a trial by fire.
From the midst of unbearable flames you called on God, crying:
Hasten, O compassionate One!
Speedily come to our aid,
for You are merciful and able to do as You will.