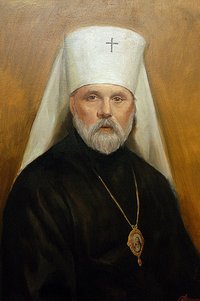 Bp. Theophilius remained in Chicago until he was transferred in 1931, to become Bishop of San Francisco. After Metr. Platon’s death in 1934, Bp. Theophilius was elected jointly by the council of assembled bishops and the full Council as the new metropolitan by the Fifth All-American Sobor that convened in Cleveland on November 20, 1934.

Continued stability came to the Church in North America as the 1930s unfolded. Relationships with other elements of the Russian church, including the Patriarchate of Moscow were still volatile. Metr. Theophilius provided leadership through the many twists and turns during the years he was Metropolitan. He participated in a consultation convened by Patriarch Varnava of Serbia in 1936 of representatives of Russian dioceses and exiles not administered by the Patriarchate of Moscow. The agreements entered into by Metr. Theophilius at this consultation were confirmed at the All-American Sobor (Council) of 1937 including stressing again that the autonomy of the Church in America was not impaired in any way by these agreements. As the Soviet regime relaxed control over the Russian patriarchate during World War II, a reproachment was initiated that soon foundered over the political implications of the demands by the patriarchate. With the backing of the Seventh All-American Sobor of 1946, the American Church under Metr. Theophilius affirmed that the “present autonomous status and the right to self-government “ was to be retained.

The political "battles" did not deter Metr. Theophilius from initiating efforts to improve the life of the American Church. Among his leadership initiatives was that of improving education at the local level, especially church schools. Also a major program was developed under Metr. Theophilius to re-establish an institution for training of clergy. Under the program, as approved by the All-American Sobor of 1937, a plan was formed for establishment of two institutions, one, St. Vladimir’s Seminary that would provide Orthodox priests and workers an education based upon principles of a liberal arts college education as the foundation of their theological training, and the second, St. Tikhon’s Pastoral School that would provide pastoral training. By this move the Church began its exit from the educational desert that began with the closing of the St. Platon's Seminary at Tenefly in 1924.