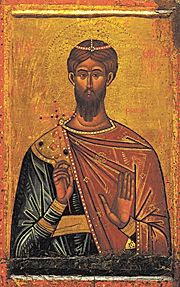 The Great Martyr Theodore the Tyro, also Theodore the Recruit, Theodore the Soldier, and Theodore of Amasea, was a soldier who served in the Roman army during the time of the great persecution of Maximian of the turn of the third to fourth centuries. His feast day is February 17.

The Martyr Theodore was a native of Amasea, in Pontus. Although a Christian from childhood, he served in the Roman army but kept his faith secret, not out of cowardice, but because he had not received a sign from God to offer himself to martyrdom. Stationed with the army units near the village of Euchdita in Pontus he learned that the local inhabitants were being terrorized by a fearsome dragon hiding in the forest. Feeling that this situation was the test by which God would show if the time had come to offer himself to martyrdom, he plunged boldly into the forest to find the dragon. He soon came to a village that was abandoned by its inhabitants except only for a noble Christian princess of imperial rank, Eusebia, who told Theodore of the location of the dragon's lair. Arming himself with the sign of the Cross, Theodore rushed towards the beast that roared and spit flames. Swiftly, Theodore brought the beast down with a spear into its head.

Now convinced, by the Grace of God, that he could also defeat the dragon-like spirit that is the devil as he had killed the visible monster, St. Theodore returned to his camp without fear of his revealing himself as a Christian. When the commander of the troops ordered that all were to offer sacrifice to the gods of the Empire, Theodore remained in his tent. When he was called and told to take part in the sacrifice, he replied, "I am a Christian. It is Christ alone that I love. He is the King whom I serve, and to Him alone that I want to offer a sacrifice!" After being questioned about his announcement, he was left alone and proceeded to exhort the other Christians. Inflamed with divine zeal, he encouraged his companions to show that they were worthy to have enlisted in Christ's army of heaven.

At night, he went to the pagan temple and destroyed the altar of the goddess Rhea, the mother of the gods, which caused great confusion in the city of Euchaita. Theodore was caught by one of the servants of the temple and taken to the governor Puplius. Theodore did not resist and calmly responded to the questions from the Governor. Theodore averred that it was absurd to consider God as an inanimate piece of wood that, in an instant, had been reduced to ashes, to which Puplius threatened him with the worst tortures. Theodore replied, "Your threats do not frighten me, because the power of Christ will be my joy and gladness in torment." Grinding his teeth with rage, the governor then had Theodore thrown into a dungeon without food. That night, Christ appeared to Theodore, to comfort and promise him that His grace is His valiant servant for both food, joy, and protection. Thus comforted, Theodore spent his time singing hymns, accompanied by angels, so that his captors believed other Christians had joined him in his locked cell.

Later, when he was brought bread and water, he refused it, saying that Christ had promised him a heavenly food. He was then again brought before the governor, who proposed to raise Theodore to the dignity of high priest of the idols. This only provoked Theodore to laugh mockingly as he certainly was ready to be cut into pieces for the love of Christ. He was then hung upside down as the executioners exhausted themselves in vain tearing his body with iron hooks. Before the indomitable strength shown by the Martyr, the governor, fearing that others might follow his example, gave the order to have him burnt alive.

When he arrived at the bonfire, Theodore undressed and after addressing a fervent prayer to God for the confirmation of other confessors, he indulged himself in the fire. But, as if they wanted to honor him, the flames surrounded him without touching his body in a sort of triumphal arch, as if giving thanks that St. Theodore then gave his soul to God.

His body was buried in the town of Euchait (presently Marsivan in Turkey). His relics were later transferred to Constantinople into the Church that bears his name. His head rests in Gaeta, Italy.

In 361, emperor Julian the Apostate, who had tried every means to restore pagan customs within the Roman empire, noticed that Christians were accustomed to sanctify the first week of Lent before Pascha by fasting and prayer. The cruel despot ordered the prefect of Constantinople to sprinkle all the food in the market with the blood of victims sacrificed to idols, so that it was impossible for any of the city's residents to escape the taint of idolatry. But the Lord did not abandon his chosen people. He sent his servant Theodore, who appeared in a vision to Patriarch Eudoxus to foil the machinations of the tyrant. He ordered that no Christian was to buy the food then presented in the markets, but that they were to eat Kollyva, that is boiled wheat grains, that they already had at their homes. Thus, through the intervention of the Holy Martyr Theodore, the Christians kept pure from the defilement of idolatry. Since then the Church annually commemorates this miracle, the first Saturday of Great Lent, to teach the faithful that fasting and temperance have the power to cleanse all the stains of sin.

St. Theodore the Tyro performed many other miracles for those who called upon him with faith and perseverance in prayer in his church. One day he appeared, shining in glory, on his white horse and returned to a poor widow her only son who had been captured by Saracens. He also delivered from danger those who were caught in a storm and became the heavenly protector of Christian people.