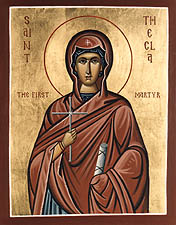 The holy, glorious and right-victorious Protomartyr Thekla (or Thecla) devoted her life to God at a time when all Christians were shunned. Her feast day is celebrated on September 24. The Church has given her the title Equal-to-the-Apostles for her missionary zeal in evangelizing pagans.

Saint Thekla was born in Iconium to wealthy parents. After having heard St. Paul speak on chastity, she decided she must follow Christ and abandon her plans to marry. Her mother and her fiancé were opposed to this decision, and their accusations to the governor landed St. Paul in prison. St. Thekla slipped away from her house to listen to St. Paul in prison, having bribed the guards with her gold jewelry to gain entrance.

At his trial, St. Paul was banished from the city, and Thekla refused to change her mind against all the tears, threats, and reasonings her mother and the governor could apply. She was firm in her conviction to follow Jesus Christ the Bridegroom. Her mother, enraged, persuaded the judge to sentence St. Thekla to burn to death. Emboldened by her love for Christ, she made the sign of the Cross over the flames, and was surrounded by a light, untouched by the flames. Rain, and hail extinguished the fire, and, with thunder, helped to drive away those who wished to put Thekla to death.

She sought out St. Paul and his companions, including St. Barnabas, who were hiding in a cave near the city. She spread the Gospel of Christ with them in Antioch, and throughout her life performed many miraculous feats and suffered many tortures to give glory to God. Having retired to a desolate region of Isaurian Seleucia with the blessing of St. Paul, Thekla continued to preach God's word and heal His children.

When St. Thekla had reached the age of 90, envious pagan sorcerors came to defile her. A large rock split open when St. Thekla called on Christ the Savior to help her, and the rock covered her, and she offered up her soul to the Lord.

"The Protomartyr Thekla, a prayerful intercessor for ascetics, is also invoked during the tonsure of women into monasticism." [1]

You were enlightened by the words of Paul, O Bride of God, Thekla,
And your faith was confirmed by Peter, O Chosen One of God.
You became the first sufferer and martyr among women,
By entering into the flames as into a place of gladness.
For when you accepted the Cross of Christ,
The demonic powers were frightened away.
O all-praised One, intercede before Christ God that our souls may be saved.

O glorious Thekla, virginity was your splendor,
The crown of martyrdom your adornment and the faith you trust!
You turned a burning fire into refreshing dew,
And with your prayers appeased pagan fury, O First Woman Martyr!