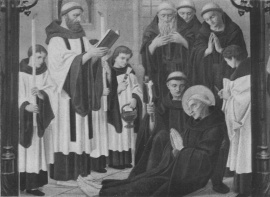 The surplice (Late Latin superpelliceum, from super, "over" and pellis, "fur") is a non-liturgical vestment used by in traditional Western worship. It continues in use by various Christian communions of the West (particularly the Roman Catholic Church), as well as in the Orthodox Church's Western Rite.

The surplice has the form of a tunic of white linen or cotton material. It was originally a long garment with open sleeves reaching nearly to the ground, as it remains in the Anglican and other English traditions. In the Roman Catholic tradition after the schism , it became shorter (barely to the hips), had closed sleeves, square shoulders and often features lace decoration. Sometimes the Roman Catholic-style surplice is referred to with the Medieval Latin term cotta [meaning 'cut-off' in Italian], as it is derived from the cut-off alb.