This is the OrthodoxWiki Sandbox! Feel free to edit here to your heart's content!

Note: Because this sandbox is for use by all editors, anything added here may well be gone or reverted in seconds. Its main use is for testing editing syntax. If you need a long-term sandbox of your own, you may want to create a subpage in your own userspace entitled something like User:Yourusernamehere/Sandbox.Right|thumb|200px|Ss Peter and Paul Cathedral in the Peter and Paul Fortress in St. Petersburg, Russia. The Cathedral of Ss Peter and Paul, the oldest church in St. Petersburg, is located within the Peter and Paul Fortress on an island near the northern bank of the Neva River. The cathedral was built under the direction of Tsar Peter I in the early eighteenth century and became the burial place for members of the Romanov dynasty. The original wooden church was the first church in the city of St. Petersburg where it remained as the current stone church was built around it. 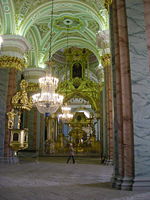 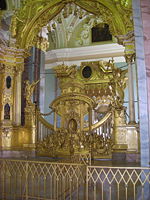 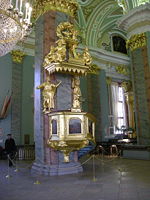