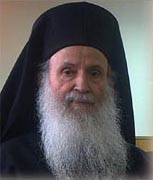 His Eminence the Most Reverend Metropolitan Sotirios (Trambas) of Pisidia was the first Metropolitan of the Ecumenical Patriarchate's Orthodox Metropolis of Korea serving from 2004 to 2008.

Sotirios (sometimes Soterios) was born in Arta, Greece on July 17, 1929. After graduating from high school in Arta, he graduated from the Theological School of the University of Athens in 1951. He then served as an army officer for two and a half years, and then as a preacher and catechist for two years in the middle and high school.

In November 1975, Sotirios volunteered to serve the Church in Korea and, with permission from the Ecumenical Patriarchate, became dean of St. Nicholas Church in Seoul. In 1986, he was appointed to be the chairman of the Orthodox Eastern Mission. As chairman, he established churches in Busan, Inchon, Jeonju, Palang-ri, the Monastery of the Transfiguration of the Savior in Kapyung, a temporary chapel in Ilsan, along with missions in Hong Kong, Singapore, the Philippines, Indonesia, and India. In 1982, he established the Saint Nicholas Theological Seminary in Seoul for the purpose of training Asian believers for the ministry. 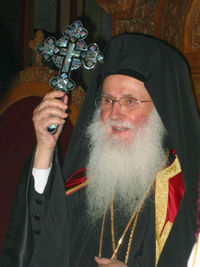 After his resignation from the See of the Holy Metropolis of Korea, the Holy and Sacred Synod of the Ecumenical Patriarchate elected him as Metropolitan of Pisidia on May 28, 2008.