Difference between revisions of "Solovetsky Monastery" 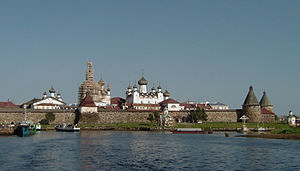 Solovetsky Monastery from the White Sea

The Solovetsky Monastery (Russian: Соловецкий монастырь) , also Solovki Monastery, is one of the most significant monastic institutions in Russia. The monastery is located on the large island of Solovetsky, a part of the Solovetsky Archipelago in the White Sea in northern Russia. The monastery became one of the richest and best known monasteries in Russia. In view of its remoteness, the monastery also became a place of exile for people both within the Church and the secular tsarist government. This prison-like function of the monastery continued until the later part of the nineteenth century. Under the Bolshevik government the monastery became one of the main prison labor camps and the model for labor camps of the Soviet Gulag Archipelago.

The establishment of a monastery on Solovetsky Island began with three ascetic monks, Savvaty, Herman, and Zosima. Savvaty built an hermitage on the almost uninhabited island in 1429 and was soon joined by Herman. The heathen inhabitants includes the Chud, Korela, and Saams tribes. After six years of rigorous life as a hermit in the wilderness, Herman returned to the mainland, followed by Savvaty who felt his days were numbered. On September 27, 1435, Savvaty reposed. A year later, 1436, Herman met Zosima and spoke to him about Savvaty and the island. These discussions led to Zosima’s decision to follow Savvaty’s footsteps, but with the aim of preaching the Gospel.

With Herman joining him, the two monks established themselves in a different, more populated, location on the island from the earlier one, thus formally establishing the Solovki Monastery in 1436. The location, a “new desert” along the coast of the White Sea, began to attract other ascetics and developed into a monastery. As the brotherhood expanded, they built a wooden church dedicated to the Holy Transfiguration and St Nicholas.

To support themselves, the monks began to chop firewood and to make salt that became the base for the monastery’s economic power. The salt they produced was black, created by using ground grain and seaweed that when dried on stoves becomes black.

As the monastery grew, abbots were sent to the island, but the first two could not live under the conditions in the wilderness and left. The third, Father Superior Jona, arrived as outside support for the monastery increased. Additionally with the arrival of Hegumen Jona, the monastery was granted the right for perpetual and exclusive possession of the entire Solovetsky archipelago. With his arrival an increase in donations enabled construction and consecration of many churches. Zosima succeeded Jona and introduced firm monastic rules to regulate life at the monastery. In 1465, the uncorrupted relics of Savvaty were buried behind the altar of the Dormition of the Holy Theotokos Church.

By 1514, the quantity of equipment at the monastery increased such that it required the preparation of an inventory and by mid century the monastery was the owner of the forests, villages, salt houses, and the agricultural fields. By the end of the seventeenth century upwards of 2,240,000 tons of salt had been produced and sold throughout Russia.

Due to its remoteness, Solovki began to be a place of exile. In the sixteenth century the Moscow government required the monastery to assume new duties as a prison and border fortress, manned by a large non-monastic force of soldiers. With its industrial base, mainly in salt production, products of the sea, and with a large influx of pilgrims the monastery became very wealthy. This in turn attracted pirates and the interest of the countries of western Europe. With the greater wealth, some of the monks saw the institutional changes as an attack on their spiritual life. These ascetics, led by Eliazar Servinkov (Anzersky) moved to the nearby island of Anzer. Among the party of monks was Nikon who would later become the controversial Patriarch of Moscow. In 1547, Savvaty and Zosima were glorified by the Church of Russia.

In 1538, Theodore Stephanovich Kolychev arrived at Solovki, after having escaped arrest when his family had received the ire of the Tsar’s court, Theodore came to Solovki after wandering for a long time. He was tonsured a monk at the monastery with the name of Philip and greatly influenced the growth of Solovki Monastery. In 1548, at the age of 41, the brotherhood of monks unanimously backed Fr. Philip for the position of abbot. This election was affirmed by Theodosius, Archbishop of Novgorod.

A great organizer, Fr. Philip proceeded to put to use the economic power of the monastery. The infrastructure of the monastery was changed greatly. He began using stone for the monastery buildings. He built canals, harbors, and roads, while continuing the traditions of education and iconography. Between 1558 and 1566, Hegumen Philip supervised the construction of the five domed Cathedral of the Holy Transfiguration at Solovki. In spite of the reputation that his family held in the court of the tsar, Fr. Philip was elevated to Metropolitan of Moscow on July 20, 1566 by Tsar Ivan IV (the Terrible). His tenure as metropolitan was short as the relationship between Fr. Philip and Ivan deteriorated; Fr. Philip opposed Ivan’s ‘‘oprichnina’‘. After a trial in November 1568 Metr. Philip was sentenced to exile at the Tver Otroch Monastery where he was strangled on December 23, 1569. He was glorified in 1591.

During the reign of Ivan IV, the government made constant use of the remoteness of Solovetsky Island as a place of exile and detention. More than 400 persons were sent in exile to the island. The island would remain the only official prison of the Russian state until the nineteenth century, a place where many people of note were imprisoned, much to the lament of the clergy as Archimandrite Illarii wrote, “the name Solovki became terrible in the history of Russia.” It wasn’t until 1903 that the prison operation ceased to exist, but again to rise again some twenty years later.

In 1571, the Germans, Swedes, and Finns began to move into the White Sea, advancing into new territories. As the wooden stockades around Solovki were only intended for light protection and were easily destroyed by a determined force, construction began in 1582 of stone fortifications, making Solovki a formidable fortress. The monastic fortress thus preserved Russian possession of these northern lands.

In 1591, the relics of Metr. Philip (Kolichev) were transferred from the monastery in Tver to Solovki Monastery, and then again when Patriarch Nikon moved his relics to Moscow during Nikon’s feud with the main Solovki monastery. About 1615, the hermit Eliazar Anzersky arrived at Solovki and established a hermitage on Anzer Island that became the Monastery of the Holy Trinity. In 1633, Tsar Mikhail Feodorovich decreed the independence of Holy Trinity from Solovki Monastery. In 1635, an extraordinary rise in the sea level of the White Sea occurred that flooded the ground floors of the monastery buildings

About 1630, Nikita Minin was tonsured and given the name Nikon at the Monastery of the Holy Trinity on Anzer Island. Later, as metropolitan of Moscow, Nikon became an adversary of Solovki Monastery over the liturgical reforms proclaimed under Tsar Alexei and Nikon.

When Patriarch Nikon issued the revised liturgical books in 1658, the monks of Solovki looked at them as a perversion of the ancient and pure Orthodox teaching and firmly refused to accept new corrected books. Initially, Tsar Alexei Mikhailovich attempted to use peaceful means to influence the monks. But, after an extended time of unsuccessful negotiations with the monks, the tsar decided to use force. Regular soldiers were sent against the recalcitrant monks. The siege of the monastery lasted for seven years, from 1668 until January 1676, before the monks were overwhelmed. Many of the monks were killed and of the survivors many became spiritual leaders of the Old Believer movement. While the monastery remained among the richest, its economy never recovered fully from this revolt.

In the late eighteenth century the importance of Solovki as a fortress diminished after Catherine II’s church land reforms. In 1854, during the Crimean war, two British frigates approached the monastery fortress, demanding surrender. After the monastery’s Archimandrite Alexander refused, the British conducted a nine hour cannon fire siege. Although the ships fired about 1,600 shoots, they abandoned the siege without causing any human casualties or any significant damage to the buildings of the monastery.

After the Bolsheviks took power in Russia in 1917, they closed the monastery in 1921. In 1923, the Solovki monastery began a life as the Solovetsky Concentration Camp of Special Designation, with the Russian abbreviation SLON (СЛОН), which means in Russian “elephant”. The Solovki camp became, in the words of Alexander Solzhenitsin, the mother of the GULAG, the Soviet system of brutal concentration and labor camps in which the opponents of the new regime were isolated and suppressed.

Only rough estimates are available of the number prisoners who went through Solovki during its years of operation, 1923 to 1939. The estimates range from tens to hundreds of thousands. The conditions were more than harsh: forced hard labor, little food, in the summer - chained to stakes in ground while prey to summer mosquitoes, in the winter - drenched with water while standing in the bitter cold to freeze to death.

During World War II, the monastery was used to train young sailors. The White Sea area remained a special restricted travel area to which few visitors were allowed, Russian as well as foreigners. In the 1960s, some restoration work began when the islands were formed into a reserve museum. In the late 1980s, the Church of Russia was allowed to reestablish itself on the islands. The first exhibit concerning the Gulag was opened in 1988 in the Solovetsky islands, and in 1992, the Solovetsky monastery was placed on the UNESCO World Heritage List.

For the Orthodox, the islands are now a place for pilgrimages. The Solovetsky Kremlin provides protection for the many churches and cathedrals within it, including St. Nicholas Church which has been restored. Regular church services are conducted in St. Nicholas Church and Dormition and Holy Transfiguration Cathedrals.