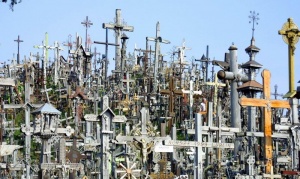 The Hill of Crosses in Lithuania cointains thousands of copies of the foremost symbol of the Faith.

The Sign of the Cross is a symbolic ritual gesture which marks the four points of the Cross on Calvary over one's body. It also represents loving God with all one's heart, soul, mind and strength. The sign of the cross is most often made at the name of the Holy Trinity, to show reverence for a saint, holy object, or person, at the beginning or end of a prayer, to show humility or agreement, or on numerous other occasions which may vary slightly according to regional/ethnic practice or personal piety. Some Orthodox may make the sign of the cross a hundred or more times during a Divine Liturgy or lengthy service.

In general Orthodox practice, the right hand is used. The thumb, index, and middle finger are brought to a point. They are then placed on the forehead after that moved down to the sternum. Finally the hand is moved to the right shoulder and horizontally across to the left. Oriental Orthodox and Western Christians, however, go in reverse order on this last step, from left to right. As one moves through the Sign, one recites, at the forehead, "In the name of the Father"; at the sternum, "and of the Son"; and across the shoulders, "and of the Holy Spirit, Amen." There are variations that occur. For example, some may mark a very large cross, or a very small one. Some may say "and of the Holy Spirit" across the shoulders. After moving the hand from one shoulder to the other, it may return to the sternum. It may be accompanied instead at times with the words of the Jesus Prayer in some form, or simply "Lord have mercy".

The thumb, index and middle finger brought to a point symbolize the Trinity, three persons sharing a single essence. The remaining two fingers are kept pressed close together and to the palm, representing the human and divine natures united together in Jesus Christ.

The sign of the cross has been used since the days of the early Church both liturgically and at times as a marker of membership, a symbol of friendship of sorts, due to the persecution of early Christians. The first recorded reference to the Sign is found in the writings of Tertullian (c. 160-225 A.D.), who says that Christians "at every forward step and movement, at every going in and out, when we put on our clothes and shoes, when we bathe, when we sit at table... in all the ordinary actions of daily life, we trace upon the forehead the sign" (The Chaplet, 3). Other mentions of the sign of the cross and exhortations to perform it whenever possible abound in the Church Fathers.

It does seem clear, though, that the most common way of making the Sign was simply to mark one's forehead, not the entire upper body. The first written record of this enlargement can be seen in St Nino, the Apostle of Georgia, from the fourth or fifth century: "St. Nino began to pray and entreat God for a long time. Then she took her (wooden) cross and with it touched the Queen's head, her feet and her shoulders, making the sign of the cross and straightway she was cured" (Studia Biblica, V, 32)."

One way of explaining the extension of the Sign is to point out that after the Emperor Constantine's issuance of the Edict of Milan in 313, which made Christianity an officially legal religion, Christians were freer to cross themselves more emphatically and in a more open manner.

Another explanation of the enlarged scope of the sign of the cross is linked to the Monophysite heresy, condemned by the Council of Chalcedon, whose dogmas are not accepted by the Oriental Orthodox. This theory speculates that: "The use of the thumb alone or the single forefinger, which so long as only a small cross was traced upon the forehead was almost inevitable, seems to have given way for symbolic reasons to the use of two fingers (the forefinger and middle finger, or thumb and forefinger) as typifying the two natures and two wills in Jesus Christ. But if two fingers were to be employed, the large cross, in which forehead, breast, etc. were merely touched, suggested itself as the only natural gesture. Indeed some large movement of the sort was required to make it perceptible that a man was using two fingers rather than one. At a somewhat later date, throughout the greater part of the East, three fingers, or rather the thumb and two fingers were displayed, while the ring and little finger were folded back upon the palm" (Catholic Encyclopedia). In Armenia, for example, and in earlier Russia, two fingers were in fact used. However, the precise development of one to two to three or perhaps just one to three fingers isn't exceptionally well documented in the Patristic literature; therefore, the findings aren't conclusive.

In the western Roman Catholic Church the direction of making the sign of the cross, which had previously been from right shoulder to left shoulder, as it is today in Orthodoxy, was changed in the thirteenth century when Pope Innocent III (1198-1216), following the Great Schism between the Western and Eastern Churches and the subsequent hostility between the respective heads (the Pope of Rome and the Patriarch of Constantinople mutually excommunicated each other), directed that the Sign was to be made with three fingers from the forehead to the breast and from the left to the right shoulder.

In Russia until the reforms of Patriarch Nikon in the 17th century, it was customary to make the sign of the cross with two fingers (symbolizing the dual nature of Christ). The enforcement of the three-finger sign was one of the reasons for the schism of the Old Believers, whose congregations continue to use the two-finger sign of the cross.

In Eastern Orthodox prayers, the sign of the cross is usually made whenever all three persons of the Trinity are addressed, or even alluded to. Before commencing any prayer, in fact, the Sign is typically made. Upon entering a church, and the sanctuary within the church, one will make the Sign partly as an outward sign of reverence and veneration. Orthodox laymen will make the Sign as one way of venerating an icon; Priests have many more specific occasions upon which to make the Sign. Many members of the Faith will make the Sign in a way that may seem idiomatic to some: for example, if a member is exposed to blasphemy, he or she may make the Sign, partly to suggest subtly and politely to the speaker that an offense has been committed. Some members of the Faith will use the Sign in what almost appears to be a wish for luck; it may be that, or a part of an unsaid prayer for God's blessing, as when beginning a journey or a sports competition.

The Sign of the Cross has minor variants as well: it can be made in the air to bless objects, and it may trace a very small trajectory, such as on the forehead (as the earliest descriptions of the Sign suggest). For a member of the Faith, perhaps the essential element of the Sign is that it physically indicates the direct relevance of the Cross, of the Sacrifice of Jesus, to one's person or surroundings. It is an engagement of the body that affirms what the faithful professes. It is also a sign to others of what one professes.