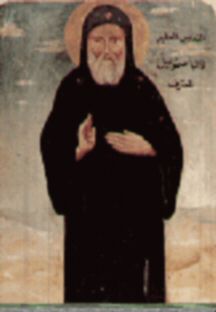 While at St. Macarius Monastery, St. Samuel was severely tortured and lost one of his eyes at the hands of imperial officers because of his Non-Chalcedonian faith. Later the Angel of the Lord appeared to him and commanded him to depart and dwell in Mount Qalamon in the region of the Fayoum Oasis in Egypt. St. Samuel obeyed, went there and built a monastery dedicated to the Virgin Mary. Many of his spiritual sons gathered around him and they increased in number until they became thousands of monks.

St. Samuel also suffered at the hands of sun-worshiping Berbers who took him captive for some time before releasing him to return back to his monastery in Mount Qalamon. The Blessed Holy Virgin Mary then appeared to him and told him, "This place shall be my abode forever," and from that day the Berbers never attacked this monastery again.