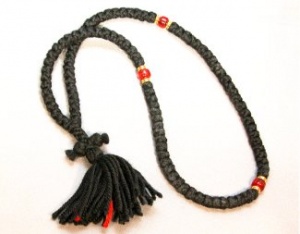 A prayer rope (Greek: κομποσκοίνι, Russian: вервица, Romanian: mătănii, Serbian: бројаница, Bulgarian: броеница) is a loop of knots, usually made of wool but sometimes of wood, that is used during praying to keep track of the number of prayers which have been said.

The rope is usually used with the Jesus Prayer: "Lord Jesus Christ, Son of God, have mercy on me, a sinner." Historically it typically had 100 knots, although prayer ropes with 300, 50, or 33 knots or, less commonly, 250 or 12 can also be found in use today. There is typically a knotted cross at one end, and a few beads at certain intervals between the knots. "The purpose is to help us concentrate, not necessarily to count." [1]

Previously, monks would count their prayers by casting pebbles into a bowl, but this was cumbersome, and could not be easily carried about when outside the cell. The use of the rope made it possible to pray the Jesus Prayer unceasingly, whether inside the cell or out.

It is said that the method of tying the prayer rope had its origins from the Father of Orthodox Monasticism, Saint Anthony the Great. He started by tying a leather rope with a simple knot for every time he prayed Kyrie Eleison ("Lord have Mercy"), but the Devil would come and untie the knots to throw off his count. He then devised a way--inspired by a vision he had of the Theotokos--of tying the knots so that the knots themselves would constantly make the sign of the cross. This is why prayer ropes today are still tied using knots that each contain seven little crosses being tied over and over. The Devil could not untie it because the Devil is vanquished by the Sign of the Cross. 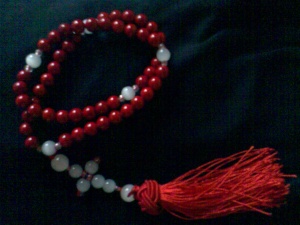 Eastern Orthodox Prayer Beads
Today one can find prayer ropes made of satin and other modern materials aside from the traditional wool. There is also the prayer rope's modern descendant, prayer beads strung together with a cross and tassel.

Despite its wide usage among the Orthodox Christians (e.g. the Greek and Russian Orthodox), the prayer rope is unknown in many parts of the world. Even among Roman Catholics it is often mistaken for a rosary. Out of ignorance some even wear them on their necks.