Difference between revisions of "Petros (Giakoumelos) of Caesarea" 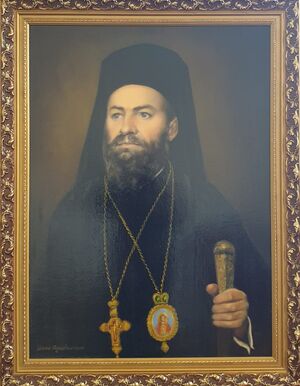 His Eminence, the Most Reverend Petros (Giakoumelos) of Caesarea (1932–2020) was the Archbishop of Caesarea in Mauretania in northeastern Africa, part of the Church of Alexandria.

On November 26, 2018, Elder Petros resigned as Archbishop of Aksum after 39 years and was elected titular Archbishop of Caesarea in Mauritania. His Eminence reposed in the Lord in the Hospital of Voulas, Athens, on November 24, 2020, in the age of 88. His funeral was held two days after in the Church of Panagia Marmariotissis in Chalandri, Athens, where he was buried by the Most Reverend Archbishop Emmanuel of Ptolemais. Patriarch Theodoros performed a Trisagion for his repose in Kenya.