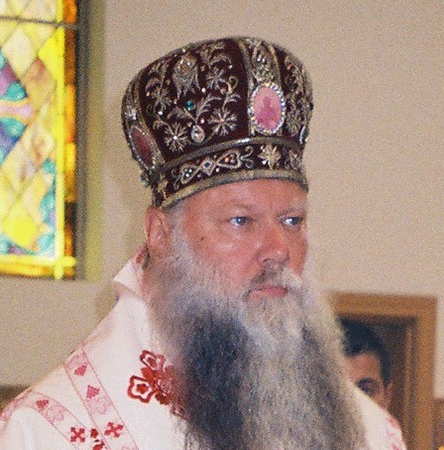 The future bishop, in the world Pavel Andreyevich Loukianoff, was born August 9, 1948 in San Francisco, California. There he studied at the Ss. Cyril and Methodius Russian Church gymnasia and school. On August 19, 1965 he was tonsured reader by St. John (Maximovitch) of San Francisco. He served as an acolyte for St. John and assisted him in archpastoral duties. In September 1966 he enrolled in Holy Trinity Orthodox Seminary in Jordanville, New York. Between 1971 and 1976 he worked at the Synod of Bishops as an aide to Bp. Laurus of Manhattan. After completing seminary, he graduated from Norwich University and the department of theology of Belgrade university. In 1988 he was tonsured a monk and ordained a hierodeacon by Abp. Laurus]] On April 25, 1989 he was ordained a hieromonk. He then worked as an instructor of Church history and world history at Holy Trinity Seminary as well as holding the position of the seminary's inspector. In 2000 he was appointed director of the Russian Ecclesiastic Mission in Jerusalem and in 2002, administrator of the Diocese of Chicago and Detroit (now Chicago and Midwest America). In 2003 the Synod of Bishops approved his consecration as Bishop of Cleveland.

Help with box
Retrieved from "https://en.orthodoxwiki.org/index.php?title=Peter_(Loukianoff)_of_Chicago&oldid=46826"