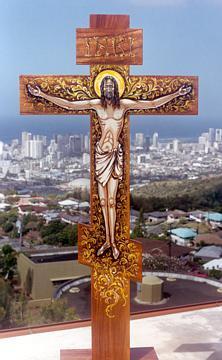 Fr. Jacob, a well-known missionary priest, established churches in Canada, the United States, Alaska, Australia and the Phillipines. He was murdered in Odessa on June 23, 1941[1], but has not yet been officially recognized as a martyred saint. St. Tikhon of Moscow once quoted Fr. Jacob's missionary exploits this way, "He did much to convert the heathens to the Christian Faith and returned many Uniates to the Orthodox Church. He set the foundation for parish life in many places, built churches and assisted the unfortunate with his acquied medical knowledge."
(Report by Bishop (Saint) Tikhon Belavin to the Holy Synod. No. 155 Nov. 26, 1906)

Following the departure of Fr. Jacob Korchincky to Australia in March of 1916, he was subsequently replaced by Archpriest John Dorosh in that same year, who remained in Hawaii until his departure in the 1920s.

In the late 1960s, a group of Russian Orthodox Christians parted ways with the local Greek community and joined the Russian Orthodox Church in Hawaii under the Omophorion of Archbishop Anthony of Los Angeles; they formed the St. Mark of Ephesus Russian Orthodox Mission Parish. In the early 1980s, this mission parish was later re-consecrated under the heavenly protection of the Mother of God and is now known as the Holy Theotokos of Iveron Russian Orthodox Church. In the late 1990s, the Council President of the Russian Orthodox community in Hawaii, Anatole Lyovin, was ordained to serve the Orthodox faithful in Hawaii. After many years of prayer, hard work and dedication, this community recently purchased a new Church complex in Kailua, Oahu. This church is also where the Miracleworking "Hawaiian" Iveron Icon of the Theotokos is brought on most Saturdays and Sundays for veneration, when not travelling to other churches. This community is under the spiritual care of Archbishop +Kyrill (Dmitrieff) of San Francisco (ROCOR). Three clergy are assigned to this parish; Priest Athanasius Kone, the Rector, Archpriest Anatole V. Lyovin, and Deacon Nectarios Yangson.

In 2017, a new Western-Rite ROCOR Orthodox Religious Hermitage was established on the Big Island of Hawaii in Kapaau. This community is Stavropegial and is under the Omophorion of His Eminence Metropolitan Hilarion (Kapral) of New York, First Hierarch of the Russian Orthodox Church Outside of Russia. The priest in charge is Fr. Columba Stephen Lally, two nuns also live and worship at the hermitage.

In the early 1990s, a Serbian community established an Orthodox mission dedicated to St. Lazar of Kosovo. The Serbian mission later became inactive, and its remaining members joined the local Russian and Greek churches. There has been a recent interest within the Serbian Orthodox community in Hawaii to re-establish this mission. In recent years, visiting clergy (including Bishop Maxim (Vasilijevic) of Western America) have come from the mainland to minister to them. This mission is now active and under the spiritual direction of Protopresbyter Blasko Paraklis.

In early 2004, a new Orthodox community under the jurisdiction of the Orthodox Church in America (OCA) was established on the Big Island of Hawai`i, in Kailua-Kona. In 2007 this was named St. Juvenaly Orthodox Mission.

In 2013, this community purchased a building in Honomu, on the east side of Hawaiʻi. The east-side mission is now known as Holy Ascension Orthodox Church.

The administrator of these mission parishes is Fr. Matthew Tate, and they are under the oversight of His Eminence, Archbishop Benjamin (Peterson) of San Francisco of the Diocese of the West. Fr. George Gray, a retired archpriest from Portland, now lives on the Big Island and cares for the needs of the two parishes.

The Iveron Icon, a small mounted print, (a copy of the Montreal Iveron Icon), originally purchased at the Holy Trinity Russian Orthodox Cathedral's small church kiosk in Toronto by Archpriest Anatole V. Lyovin, was given to the Reader Nectarios in Hawaii as a gift for the aforementioned name's day. This Icon was in the Reader's possession for eight years before it, along with a small hand-painted cross, began exuding a fragrant oil-like substance traditionally referred to as "myrrh" by the Orthodox Church. It was decided by Archbishop Kyrill of San Francisco that this Icon of the Mother of God was to be taken to the Holy Virgin Russian Orthodox Cathedral in San Francisco where it underwent investigation and testing and was carefully examined by the Archbishop and a commission of priests to verify the Icon's miraculous attributes.

In June of 2008, the "Hawaiian" Iveron Icon of the Mother of God was declared by the Russian Orthodox Church to be a genuine and miraculous Icon, which was in fact exuding myrrh on a continuing basis. It was decided by Episcopal proclamation (Ukaz) that the Reader Nectarios, the Icon's original owner, be "Her" guardian and was to escort the Icon to the various churches and monasteries of Holy Orthodoxy, in effect, to provide for the veneration of all Orthodox Christian faithful.

Since that time, the Miracle-working Icon has visited over 1000 churches and monasteries throughout North America, Europe, and Asia, and has been venerated by millions of faithful. The holy Icon has been a constant source of a growing number of miraculous occurrences, including the healing of cancer, blindness, demonic possession, and various types of physical and spiritual infirmities. People have felt a deep spiritual connection to this Icon, even spending hours on end simply standing before "Her", and watching the myrrh flow from the hands and stars on the image.

As She travels, the Holy Icon has been lovingly called in Greek, "The Wandering Panaghia" since She does not have a memorial church shrine to call Her own. When resources become available, plans are underway to build a proper chapel or church structure in Hawaii to house the Mother of God's Wonderworking Icon. It has also been affectionately referred to as the "Protectress of the Orthodox in Hawaii" by some of the Orthodox Christian faithful in Hawaii, since Orthodox Christians from all the Hawaii parishes have come to love and have grown very close to this miracle from God.